More Arrested For Marijuana Under De Blasio Than Bloomberg & Giuliani

Under the first four months of Bill de Blasio's "Liberal Agenda," the NYPD has arrested 80 people each day for low-level marijuana possession [PDF], slightly higher than the average of 78 arrests per day in 2013, and nearly nine times what they were when Bill Bratton served his first term as police commissioner in 1994.

Unsurprisingly, 86% of those arrested for cannabis possession from January through April of 2014 were blacks and Latinos, 29% of them teenagers—79% of all the arrestees were between the ages of 16 and 34. 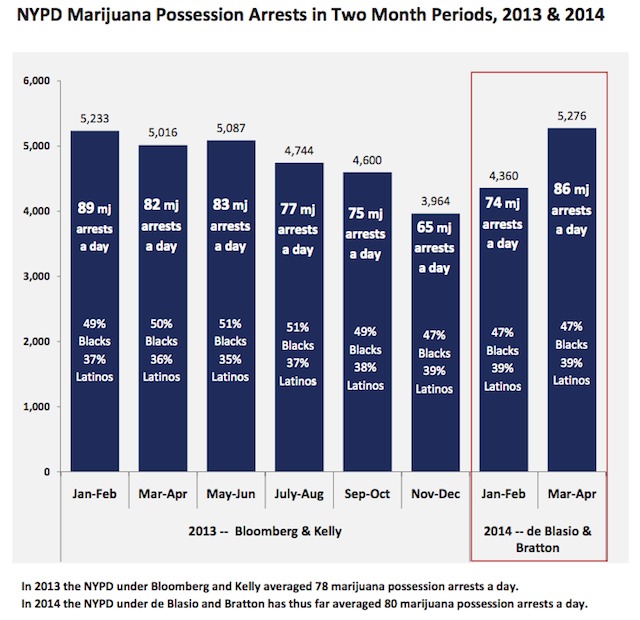 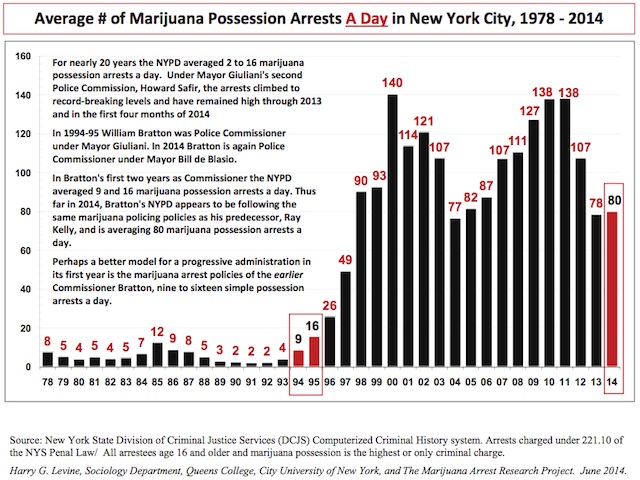 When Bratton served under Mayor Giuliani in 1994 and 1995, the NYPD were making an average of 9 and 16 arrests for marijuana possession each day.

At a City Council hearing last month, Commissioner Bratton seemed unfamiliar with current New York State law that decriminalizes small amounts of marijuana, and asserted that low-level marijuana arrests were down under his command, yet this data from the New York State Division of Criminal Justice Services disproves that statement.

While there were just 10 total arrests for marijuana possession on the Upper East and West Sides in the first four months of 2014, Washington Heights saw 371, which is more than 20 other police precincts combined. The Morris Heights section of the Bronx saw 392, and East New York saw 500.

"This is a practice and a policy that's very easy to fix," says Loren Siegel of the Marijuana Arrest Research Project. "All it requires is for the mayor to tell the police commissioner to stop it."