More And More People Hit By Subway Trains These Days

If it seems like there are more gruesome incidents involving people getting hit by subway trains, it's not your imagination. There was a 15% spike in injuries last year resulting from subway trains hitting folks: 147 people were hurt to some degree in this manner, up from 128 in 2010. The stats from the NYC Transit’s Office of System Safety [pdf, scroll way down] don't track how many of these incidents resulted in fatalities, nor how many of these were suicides, accidents, or assaults.

Judging by reports in the media and elsewhere, we've been getting the impression that 2012 has seen an even bigger spike in what first responders colloquially refer to as "train jobs." An MTA spokesman tells us that so far this year, there have been 21 fatalities caused by oncoming trains, including the most recent tragedy that happened Friday night at the Bedford Avenue L train station.

The total number of injuries decreased from 4,996 in 2010 to 4,783 last year, and there was a slight dip in injuries in 2011 resulting from people who fell, slipped, or tripped in the subway, down to 3,282 last year from 3,302 in 2010. And in other good news, zero straphangers were "struck by missile" last year, according to the report, down from 10 injuries in that category in 2010. (The MTA press office says this refers to "someone throwing an object.") 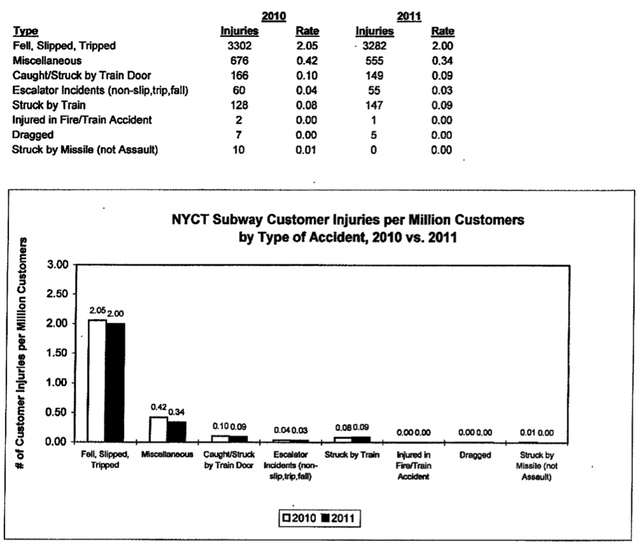 #hit by train
#struck by train
#subway
#subway injuries
#subway safety
#train jobs
Do you know the scoop? Comment below or Send us a Tip