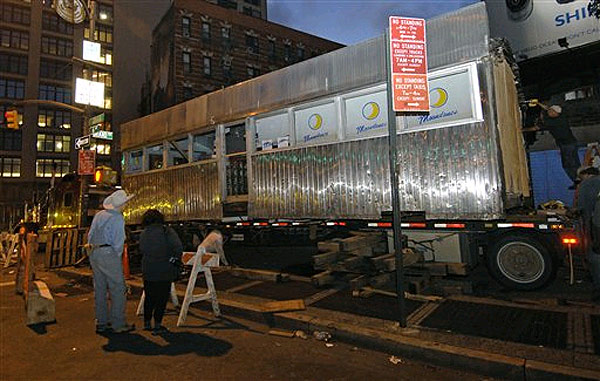 After a few days of delays, Vincent and Cheryl Pierce were finally able to pick up the Moondance Diner, the Soho standby, and move it back to LaBarge, Wyoming. The diner closed earlier this year after the landlords decided to transform the corner of Sixth Avenue and Grand Street into luxury condos. Developer Extell donated the diner to the American Diner Museum, which then sold the structure to the Pierces for $7,500.

The diner's move was postponed on Tuesday when the Department of Buildings demanded that the moving plans be "clarified." And then Wednesday's rainstorm created another delay. Mel Brandt, who has moved many diners,said that the bureaucracy in NYC was something else.

It is a 2,100-mile drive to LaBarge, and Pierce told the AP that he and his father-in-law will share the driving. "We can't go more than 45 MPH or maybe 55 max." The diner was leaving today via the George Washington Bridge.

The city will miss the Moondance, but at least it will live on, not just in TV and films but our memories too. And the Daily News reports that the Pierces hope to open up for business soon after the move, but wonders, "how ya gonna keep 'em down in La Barge once they've tasted New York egg creams?"