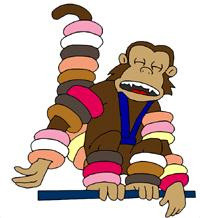 A 22-month-old Queens girl, Kimberly Salinas, may have lost her pinky finger after sticking it through a backyard fence, on the other side of which was a neighbor's caged pet monkey. The monkey bit the girl's little finger and surgeons spent 12 hours trying to reattach it. It's unclear if they were successful or not. The Salinas family lives next door to Mimwon Khan, who was illegally keeping a capuchin monkey named Sampson as a pet.

Khan, who has kept Sampson for eight years without incident, was arrested following the finger biting and will be charged with being a criminal nuisance and keeping an illegal pet. Oscar Salinas reportedly left Kimberly alone in their Hollis, Queens back yard to get his daughter a sippy cup, when he returned to find her finger dangling from her hand and barely attached. "I don't like that monkey," he told the Daily News.

Sampson the monkey will be killed in order to test the animal for rabies. The proverb "good fences make good neighbors" apparently only applies when one refrains from poking one's fingers through that neighbor's fence.

#bite
#finger
#monkey
#queens
#salinas
#sampson
Do you know the scoop? Comment below or Send us a Tip