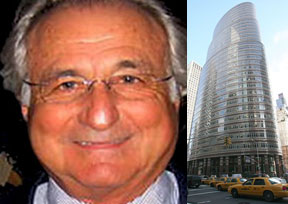 Securities and Exchange Commission inspectors have been working overtime to go through the records of Bernard Madoff and his investment firm. Bloomberg News reports that investigators "found evidence he ran an unregistered money-management business alongside his firm’s brokerage and investment-advisory subsidiaries." Also, "Investigators are still trying to figure out where customers’ money went," as Madoff's estimate of $50 billion in losses may be "roughly accurate."

Madoff, the 70-year-old former chairman of Nasdaq, confessed to employees—including his sons—that his well-performing investment firm was actually a Ponzi scheme, as the returns to earlier investors were taken from money of new investors. Madoff allegedly oversaw the entire operation from the 17th floor of the Lipstick Building on Third Avenue (pictured), two floors from his company's trading floor. The NY Times calls the floor" Where Wealth Went to Vanish," and notes another big question is "how one person could have pulled off such a far-reaching, long-running fraud, carrying out all the simple practical chores the scheme required, like producing monthly statements, annual tax statements, trade confirmations and bank transfers."

The head of Seabreeze Partners, a Palm Beach and NY hedge fund, told the BBC, "It appears that at least $15bn of wealth, much of which was concentrated in southern Florida and New York City, has gone to money heaven." In Palm Beach, where many of Madoff's clients were recruited, one woman explained to the Times how to pronounce the scamming investor's name: "Made off. You know, like he made off with all our money.”

There are many examples of Madoff's victims. Some that were mentioned today: The NJ couple who just sold their house and put their profits into their Madoff account; HSBC, which may have lost $1 billion; and charitable organizations run by Daily News owner Mort Zuckerman and director Steven Spielberg.

Clusterstock had guessed Madoff never intended to dupe anyone: "In the beginning, he probably produced the returns he said he produced. Then, somewhere along the line, he probably had a bad month or two that he thought he could quickly offset with a strong one. So he fudged the results and then got back to even... He probably did this a few times until, eventually, the recovery didn't get him back to even. Instead of admitting this, however, he kept it up in the hopes that someday it would--and in the hope that he would be able to preserve his life and reputation."

And for some reference, CityRoom covers the original Ponzi scheme from Charles Ponzi.

#Bernard Madoff
#hedge fund
#investment
#ponzi scheme
#trading
Do you know the scoop? Comment below or Send us a Tip