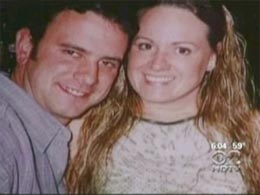 Though firefighter Kevin Prior died over six years ago when responding to the September 11 attacks at the World Trade Center in 2001, a struggle over his FDNY pension has gone to court.

Prior's parents do not think his then-fiancee Doreen Noone should be entitled to half the $75,000 annual pension. They tell the Post it's not really about money, but have the "truth" "acknowledged:

The Priors concede that the young couple was engaged, with a wedding date set for July 12, 2002, an $8,000 ring on Noone's finger and contracts in place for a photographer, a church and a reception.

But the parents have accused Noone of lying to the Fire Department that the pair lived together, so that she might have a better shot at winning the $37,600 annual payout from the pension board.

Noone says she's sickened by the fight, "I just want to get recognition that I was almost married to Kevin... I understand his parents lost a son, but I lost my fiancé. We dated for four years. We got engaged in May [2001]." Noone is now engaged to Prior's best friend, a police officer.

Noone's lawyer points out the Priors have received $1.5 million from the Victim's Compensation Fund. If his client is awarded half the pension, she would receive $262,000. The two parties are expected back in court on May 29, since they did not reach a settlement yesterday.

#9/11
#domestic partners
#fdny
#money
#september 11
#settlement
#world trade center
Do you know the scoop? Comment below or Send us a Tip
A new Gothamist is coming! We’ve moved comments over to our beta site. Click here to join the conversation and get a preview of our new website.