Today, the Times, Post and Daily News look at one devoted mother's fight to prove her son's innocence. Doreen Giuliano, whose son John Giuca was convicted in the murder of a college student, transformed herself from a 46-year-old married Brooklyn mother to a sexy 30-something California transplant in order to catch the eye of a juror from her son's trial (see before and after pictures at left).

According to the Post, "So [juror Jason Allo] wouldn't recognize her from the courtroom, Giuliano altered her appearance by hitting the gym, visiting a tanning salon, dying her hair and buying a new wardrobe of short-shorts, tight blouses and pushup bras." (Her husband would wait up for her in their Prospect Park South home after her dates.) Now Giuliano said she has Allo saying on tape that he should never have been jury.

In 2003, Fairfield University student Mark Fisher, a NJ resident, was found wrapped in a blanket, shot mutliple times, and dumped on Argyle Road. It turned out he had crossed paths--through mutual friends-- with Giuca and friend Antonio Russo, who were charged with his murder. Prosecutors said they referred to themselves as part of the "Ghetto Mafia" and a jury later found them guilty two years later. But Giuca's family and friends have maintained he was set up and that prosecutors didn't do a thorough job--spurring Giuliano into action. 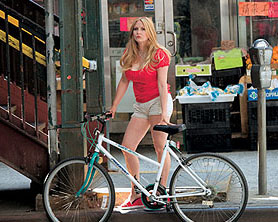 Apparently Giuliano followed other jurors, but decided to target the 32-year-old Allo and would bike around his Brooklyn neighborhood wearing revealing clothing. A Vanity Fair article details Giuliano's plan, which included months of getting to know Allo, who eventually told her, "Technically, by law, I shouldn’t have even been in that jury. Because they ask you in the beginning when you go to jury duty, they read you a list of all the witnesses.… And if you know or are affiliated with these people in any way you have to let them know," implying he did know some.

Giuliano, who says "I woulda had sex with him if that's what it took," is using her tapes of conversations with Allo to get her son's conviction overturned. And the NY Times spoke to Allo and revealed to him that his old flame "Dee Quinn" was actually Giuca's mother; he said, "There was something about her that didn’t feel right," and denied knowing any of the witnesses at the trial.