This time last year, Governor Andrew Cuomo opposed the idea of legalizing marijuana, calling it a “gateway drug.” In December, Mayor Bill de Blasio said he was “proud” to be out of step with the majority of Democrats and New Yorkers who support legalization. In the meantime, another 18,000 New Yorkers, most of them Black and Latino, would be arrested for low-level possession of a plant that has been decriminalized in the state since 1977. Now, after a flurry of action from public officials, the Empire State’s policy of prohibition may be crumbling.

Gothamist's Christopher Robbins spoke about the sudden spate of marijuana-related announcements to David Furst on WNYC's All Things Considered—listen below:

Less than 48 hours after The New York Times published an investigation on the racial disparities of marijuana arrests on Sunday: Governor Cuomo announced that his commission to study marijuana legalization would release their report on legalization in “days,” months ahead of their deadline; the district attorneys in Manhattan and Brooklyn are weighing whether to stop prosecuting the vast majority of marijuana arrests altogether; and Comptroller Scott Stringer released a report showing that legalization could net the city and state a combined $771 million in tax revenue.

On Tuesday, City Council Speaker Corey Johnson and Al Sharpton met at City Hall to demand an end to the racial disparities of marijuana arrests, and to call for marijuana legalization.

And a few hours after that, in Washington, D.C., Mayor de Blasio told the audience at a conference that he was “announcing that the NYPD will overhaul and reform its policies related to marijuana enforcement in the next 30 days. We must and we will end unnecessary arrests and disparity in enforcement.”

“I think this is a combination of quite a few factors, but first and foremost, just the fact that New Yorkers don’t accept the ongoing racially biased enforcement of marijuana prohibition,” Melissa Moore, the deputy state director for the Drug Policy Alliance in New York, told Gothamist.

"I think the fact of the racial disparity, it’s been reaffirmed repeatedly for the last few years. And it’s finally taking root," Fagan said. "Perhaps because there's a broader public consciousness in racial disparities in criminal justice, perhaps because more people are willing to accept marijuana as a legal substance."

“I feel like there’s been this momentum building for the last couple of months as states surrounding New York have announced their plans to legalize, or have started to legalize,” said Manhattan State Senator Liz Krueger, who is co-sponsoring the Marijuana Regulation and Taxation Act in Albany.

“Massachusetts, Vermont, New Jersey, Canada, who we share a border with—the entire country is going to legalize marijuana this July. So I really do feel the momentum is here,” Senator Krueger said, while acknowledging that Governor Cuomo’s most prominent opponent in the Democratic primary may also have something to do with the speed of the executive branch’s change of heart.

“I do think that the ‘Nixon Effect’ is real on any number of issues, but it’s also true that the Governor spoke about legalized marijuana back in January.” 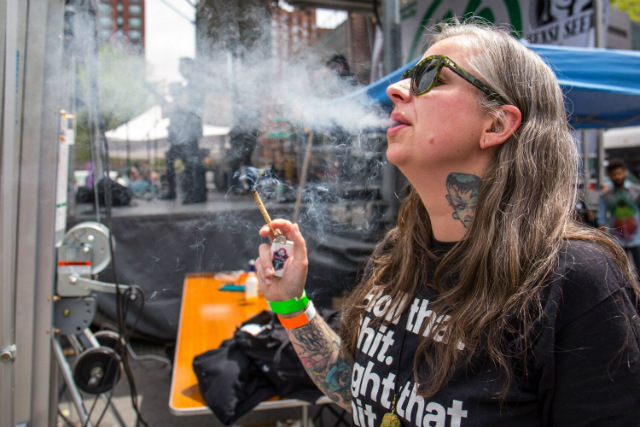 While petty marijuana arrests have declined under de Blasio, their stark racial disparities have persisted through the mayor’s first term and into his second: 86 percent of those arrested for possession were Black or Latino, despite the fact that they represent just 55 percent of the city’s population.

The mayor and his police commissioner, James O’Neill, have denied that the arrests are based on racism, and point to “heat maps” showing instances of 311 and 911 complaints of marijuana smoking to justify them.

A WNYC story from last month and the Times' story on Sunday undercut their defense that officers are merely responding to complaints by showing that in precincts where marijuana complaints were the same, the NYPD made more arrests in neighborhoods with more people of color.

At a City Council hearing on Monday, Commissioner O’Neill continued to deny that the arrest policy was based on racism, but he admitted that a problem existed.

“There is a disparity and we’re trying to find what that disparity is. We’re not looking to arrest any people of color that have no nexus to violence,” O’Neill said. “Thirty-six percent of the marijuana arrests in 2017 had no criminal history. That’s not what I’m looking for.”

In an email, Austin Finan, a spokesperson for Mayor de Blasio, wrote that the "Mayor’s views on legalization have not changed," and said that a statement from the NYPD on its marijuana reforms would be forthcoming.

For Manhattan DA Cy Vance Jr. and Brooklyn DA Eric Gonzalez, that may mean declining to prosecute all but the most serious marijuana offenses. The Times reported on Tuesday that the Gonzalez’s office was “experimenting for several weeks with declining to prosecute some cases of people who were arrested for smoking in public,” while Vance’s office has begun studying jurisdictions where marijuana is legal.

The majority of people who are arrested on marijuana charges in New York receive an ACD, an Adjournment in Contemplation of Dismissal, meaning that their charges are dismissed if they stay out of trouble for six months to a year.

“Prosecutors don’t necessarily even take these crimes seriously, but yet we know that the collateral consequences that the arrest has on people are clearly dramatic,” Moore says.

“We have this disconnect between what’s happening in terms of the effects on people’s lives and the perceived seriousness of what’s going on. It’s time to bring that into alignment and move past prohibition in such a way that we’re building up and benefiting out communities instead of continuing to make arrests that impact people’s lives.”

The NYPD commissioner has argued that police stops for smoking marijuana in public are an essential tool, because sometimes they lead to the arrests of wanted criminals or those possessing weapons. Fagan the law professor, said "that explanation falls apart when you consider the number of people who are arrested for marijuana with no criminal records."

Moore added, "There’s no public safety argument to be made that could possibly counterbalance the devastating impact those 18,000 arrests have on those people’s lives. Those people will be struggling to find jobs, maintain housing, continue education."

Moore noted that given New York’s history of racial disparities in arrests, it’s important that any legalization efforts also include clearing people’s criminal records and reclassifying those currently in the criminal justice system, something addressed by Kreuger’s legislation, which is sponsored in the Assembly by Crystal Peoples-Stokes.

“I think it may be a stretch that the Senate Republicans will vote for this bill before the end of session in a few weeks, but based on conversations with many of my colleagues, I’m feeling fairly optimistic about 2019,” Senator Krueger said. “And the Democrats are feeling quite optimistic about coming back in the majority in January 2019, and I think that it is a much easier lift with a Democratic Senate.”

[UPDATE / 4:19 p.m.] In a statement, Manhattan DA Cy Vance Jr. just announced that he would stop prosecuting most marijuana offenses. "Effective August 1st, my Office will decline to prosecute marijuana possession and smoking cases," Vance said. "We are in discussions with the Mayor and Police Commissioner to consider limited exceptions to this policy, the goal of which is to radically reduce the criminal prosecution of these offenses.”

Vance says this move is "the culmination of six months of research and policy analysis, including extensive, in-person interviews with law enforcement officials in jurisdictions where marijuana is no longer criminally prosecuted." His office's findings are compiled in this report.

Less than an hour after Vance's announcement, Brooklyn DA Eric Gonzalez made a similar, if less sweeping announcement:

Three months ago we began a pilot program in which we declined to prosecute some instances of smoking marijuana in public where a public nuisance was not created, doubling the number of cases we declined to prosecute. In the coming weeks, we will work with the Police Department and the Mayor to identify the very small number of exceptions that raise public safety concerns, and any case that does not fall within these exceptions will no longer be prosecuted.