Smooth cocktail jazz clashed with protest chants outside of the MoMA sculpture garden on 53rd Street last night, as a line of black SUVs dropped off black-tie benefactors at MoMA's Party in the Garden—the modern-art museum's biggest annual benefit.

As escorts in white jackets ushered guests under the tent with massive umbrellas, over 100 soggy museum curators, administrators, librarians, visitor assistants, designers, researchers, and gift shop employees—all members of UAW Local 2110—shouted from across the street: "We are MoMA!" and "Modern art, ancient wages!"

Local 2110's five-year contract is set to expire on June 20th, and with it, generous healthcare coverage that helps make up for what workers say are MoMA's low salaries. The proposed contract also calls for percentage salary increases from 1% to 2%, according to an e-mail sent to union members on Monday, while the contract set to expire insured increases between 3-3.5%. At MoMA, the majority of white collar workers make $50,000 a year or less, according to multiple union members. For those making the lowest pay grade, like museum shop workers, the starting salary is $29,000.

Under the current contract, employees have no deductible in-network, no out-of-pocket charges, and emergency room copays of $100. According to the union, the proposed contract would require, in addition to a mandatory deductible between $300 and $600, 15% out of pocket for all hospital visits, up to $2,500 for an individual or $5,000 for a family.

This stings, especially coming from an institution whose endowment, according to FY 2014 financial statements, was worth $838.9 million last June. "Nobody works here for the salaries," said Jennifer Wolfe, a registrar with a seven-year-old daughter. "It's really the benefit package that makes it possible. Most of the families here rely on MoMA healthcare for the entire family." 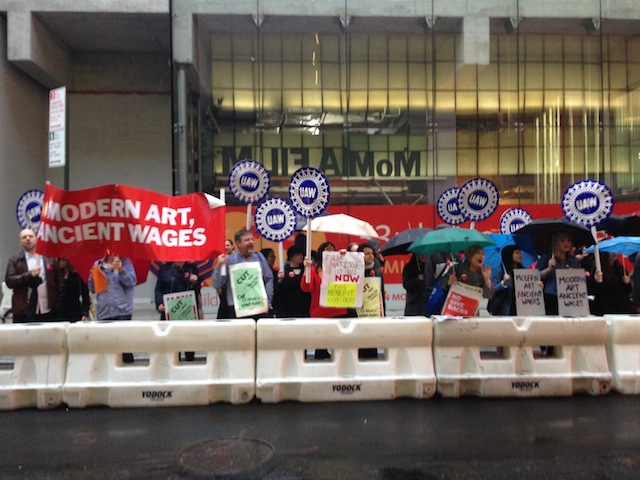 More than 70% of MoMA's Local 2110 members are women of child bearing age. "If you're having a baby, this contract means you're paying for it," Local 2110 organizer Maida Rosenstein said.

"It feels like a direct attack on our ability to do our job," said Megan Grann, who works for the museum bookstore. "Upper management is skewed heavily towards men. Women are the lower-paid workers, and have to take on these costs during childbearing years." Ingrid Langston, a curatorial assistant, is currently 9 months pregnant. "My entire family will be on this health insurance plan," she said. "It's pretty untenable for all of us."

Grace Kwon, a senior visitor-services assistant, has been working at MoMA for three years, and takes home $886.72 bi-weekly. "I'm in a senior position, and I take home maybe $100 above the poverty line every month," she said. (The bi-weekly income threshold for Women, Infants Children (WIC) aid in NYC is $838). Under the proposed contract, "If I have to go to the ER because my doctor isn't available, I'm fucked." She added, "Tickets [at Party in the Garden] cost... up to $100,000. For an internationally renowned art institution to treat their staff like this is totally unacceptable. " 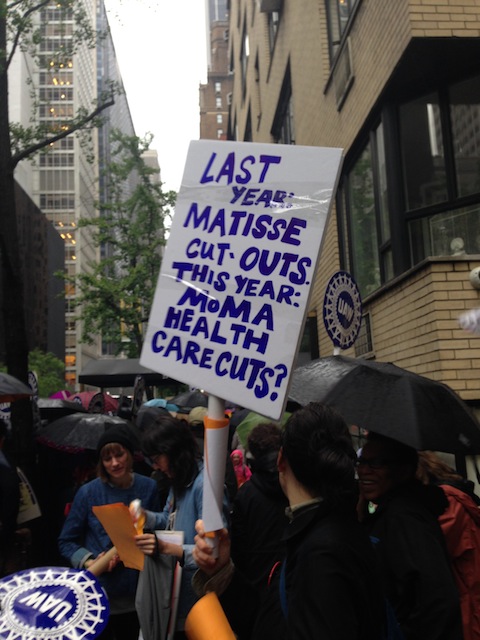 Sacha Eaton, an associate registrar who's on the union's bargaining committee, estimates that under the management's proposed contract, employees would see medical costs between $3,000 and $6,000 per year. "One of the things we're really upset about is the income gap at the museum," said Eaton. For comparison, MoMA Director Glenn Lowry earned $1.32 million in 2009, according to Bloomberg. "We feel like there's no way they [the upper management] can understand what it's like to scrounge to pay the rent."

MoMA issued the following statement last night: "At this time, we are in the process of negotiations with Local 2110, and are optimistic that we will reach a positive outcome for the staff and all concerned."

Back in 2000, MoMA's Local 2110 workers embarked on an 134-day strike, and were pleased with the resulting contract, which included an 18% increase in their wages over five years.

Asked if she thinks another strike may be imminent, Eaton said, "It's something that we don't want to happen. But if it comes to that, I think people are willing to strike to keep the benefits that we signed up for. We're going to do what we have to do."

#healthcare
#moma
#Party in the Garden
#UAW
#original
Do you know the scoop? Comment below or Send us a Tip
A new Gothamist is coming! We’ve moved comments over to our beta site. Click here to join the conversation and get a preview of our new website.