Somebody threw a molotov cocktail through the glass front door of a Queens strip club early Thursday morning—the same club where Knicks forward Cleanthony Early had been partying shortly before he was robbed at gunpoint and shot in the kneecap early Wednesday.

According to the NYPD, the cocktail was thrown shortly after 5:30 this morning, at CityScapes Gentlemen's Club near 55th Drive in Maspeth. FDNY responded to a call for smoke, and found no fire at the club. No injuries were reported. A spokeswoman for the NYPD said that the assailant fled south on 58th Street in a Nissan Altima.

As of this morning, no arrests have been made in the robbery and shooting of 24-year-old Early, who left CityScapes shortly before 4:30 a.m. on Wednesday and got into an Uber with a girlfriend. Authorities told DNAInfo that they believed Early had been targeted by a group of robbers who recognized him at the club and called in reinforcements for a coordinated attack.

About half-a-dozen suspects converged on Early's Uber in three vehicles that morning, near the intersection of Maurice and Tyler Avenues about a mile from the club. According to the NY Times, the robbers ordered him out of his Uber, some wearing ski masks and holding small semiautomatic weapons. They proceeded to take Early's cash and iPhone, plus two thin gold chains and the gold caps off of his teeth.

One of the suspects shot Early in the right kneecap before the group fled. Early's girlfriend was unharmed. Early, in considerable pain, sought help at a nearby residence, but according to the NY Times, two neighbors called 911 because they assumed Early was a burglar.

"He is grabbing on the door handle and leaning on the door," one neighbor, Armand Czapkowski, told the paper. A second neighbor realized that Early was hurt, however, and let him inside. He was transported to Elmhurst Hospital in stable condition. 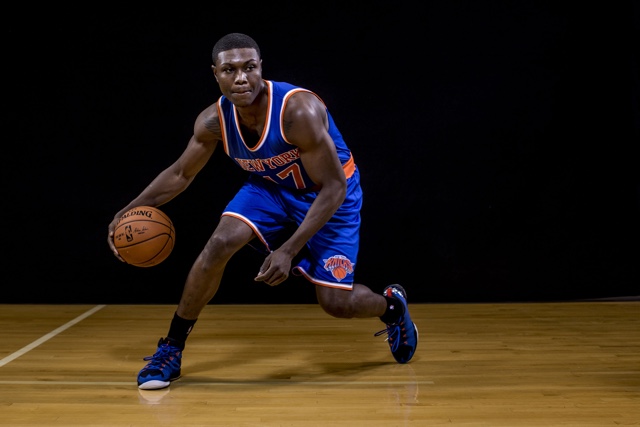 Police sources told the Post this week that they believe the robbery may be part of an organized crime ring targeting patrons of strip clubs, citing one case in the Bronx and two in Queens in the last three months.

In one instance, a man was shot in the stomach outside of Show Palace Gentleman’s Club in Long Island City.

Early, a Bronx native, has been playing for the Knicks and their developmental league since being drafted in the second round of the 2014 draft.

He is not the first NBA player to be the victim of a crime in recent months. Earlier in December, forward Derrick Williams was allegedly robbed of more than $700,000 in jewelry by two women he met at a nightclub.

Ex-Knicks power forward Chris Copeland was among three people stabbed outside of the Chelsea club 1OAK in April. Atlanta Hawks player Thabo Sefolosha was also injured during the arrest.

In the aftermath of the Early robbery, Knicks Coach Derek Fisher said of Early and Williams, "It's clear that they're victims. They didn't break any laws." Fisher added that now is not the time to tell players what they "should and shouldn't be doing" in public.

"We all are targets at the end of the day," he told the Times. "I'm not a saint. I go out and have a good time with friends and family. But I think we have to do a better job of being more safe and putting ourselves in safe environments."

#anti-gun-violence
#Cleanthony Early
#maspeth
#nba
#shooting
#strip club
Do you know the scoop? Comment below or Send us a Tip