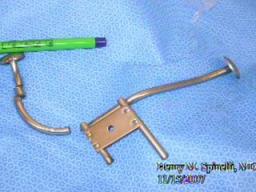 Possibly the most haunting thing we've seen is coverage of the Staten Island woman who had a coat hook pierce her face - and how a plastic surgeon who helped save her face. Fifty-three year-old Geri Rivero was at a co-worker's party last month when she slipped in the bathroom. According to the Daily News, she grabbed the metal coatrack, but "somehow, the hook pierced the bone under her right eye, plowing through muscle and lodging in the sinus cavity behind her cheekbone." YIKES.

Rivero wanted to pull the coat hanger out of her face, but luckily her boss stopped her. The coat hanger (pictured) was cut off at the base by fire fighters and Rivero was taken to New York Presbyterian.

Not only did the hanger go through the "inferior region of her right eye into her ethmoid and maxillary sinus spaces and across her face" and perforate her skull and eye socket, part of the hanger was obstructing her mouth, which meant anesthesiologists couldn't sedate her during surgery. But Rivero agreed to under the surgery without anesthesia, even though "she couldn't get oxygen, because sparks from cutting the metal would have caused an explosion." Dear God!

Luckily, the surgery went well and Rivero, whose vision is improving (some eye muscles were pierced), was back at work two weeks later. She said of her plastic surgeon, Dr. Henry Spinelli, "God sent me this man."

Here are photographs of the hanger in Rivero's skull - and after pictures. They're pretty scary, so be warned. if you're squeamish.