Nine former models are bringing a class-action lawsuit against their onetime agencies, claiming that the companies kept them in the dark about finances and kept them stuck in serf-like dependency by delaying payments, forcing them to rent beds in apartments at exorbitant rates, and even policing their love lives. The suit, a reboot of one brought in 2012 that made similar claims but floundered on legal technicalities, alleges that the agencies force models to sign over control of their lives and images, but by classifying them as independent contractors and providing precious few financial details, bilk them through every step of the posing process, then secretly re-license their photos indefinitely.

"The lack of financial transparency has always been viewed as the ghost in the room and it knowingly and sometimes unknowingly affects every model in the industry," model Alex Shanklin wrote in a 2014 letter. "Since this issue has never been properly addressed, the core of the problem has created a sense of fear, enabling the agencies to operate in an environment of learned helplessness towards the models. This type of environment mirrors typical predatory behavior and needs to be stopped."

The latest set of allegations in an updated complaint filed late last month alleges that five named agencies in New York and Miami "have systematically taken advantage of the models they claim to represent by unlawfully diverting millions of dollars in value from the models to themselves." Standard contracts, the suit explains, give agencies exclusive rights to arranging modeling gigs for the client workers in a specific city, nationwide, or often, globally.

Though the models are classified as freelancers, they must check in with their managers on the phone or in person, sometimes as frequently as twice a day, with the managers exercising near-total control over their diet, hair, exercise regimen, wardrobe, sometimes with the ability to mandate a curfew, a dermatologist visit, or a plastic surgery appointment.

The alleged economic coercion depends on keeping models in the dark. One model, Vanessa Perron, says that she worked for a firm called Next Management for about eight years starting in 2002. According to the lawsuit, the agency charged her for supposed expenses by deducting them from her paycheck, but would not provide a detailed accounting of those expenses, a practice all the plaintiffs describe. The charges included fees to keep her photos on the company's website and another online service, the full cost of shipping fees for shipments containing material meant for many other models, and the circulation of portfolio books with her photos in them. 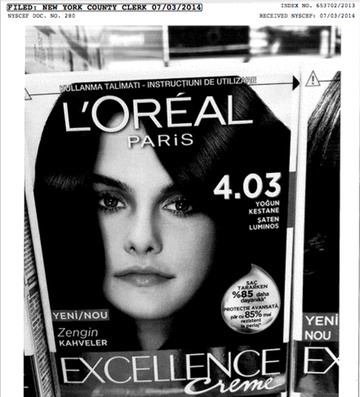 A L'Oreal box with Melissa Baker's face on it, spotted by a friend in Istanbul. (New York County Supreme Court)

On one assignment, she says she was required to fly to Australia to shoot for Harper's Bazaar Australia—to turn down an assignment would mean jeopardizing future referrals—with the understanding that the magazine would cover the airfare. When she received the check for the work, she says the agency had taken the cost of the plane ticket out of her payment. The agency later allegedly also told her she needed "thigh slimming" and recommended a surgeon, though it's not clear what became of the order.

Perron told the New York Post that she and other models were denied food on 12-14 hour photo shoots.

Another plaintiff, Marcelle Almonte, says her agency, MC2 Model and Talent Miami, forced her to pay $1,850 a month for a spot in a two-bedroom that she shared with eight other models in the mid-2000s, each paying the same rate, two bunk beds to a bedroom, and one on the couch. The same building recently rented apartments starting at $2,900 a month, according to the suit, meaning the owner was making as much as $13,750 more per month than today's market rate.

Among the most successful of the former models was Melissa Baker, who worked for big brands including Ralph Lauren and Macy's, and was featured in a Sports Illustrated swimsuit issue. In some instances, she said her agency Click agreed to have her work for clothes and accessories instead of money, and that part of the time she didn't receive even those.

The company also allegedly tried to exert extreme control over her life, at one point allegedly advising her to dump her boyfriend at the time, who was serving in the military in Afghanistan, and "replace him with an A-list celebrity or professional athlete."

According to the lawsuit:

When Baker began pressing Click for a big check from a Sports Illustrated job, she says she was blackballed, and that a photographer who'd wanted to work with her told her mom the agency said she was all booked up when in fact she had no work. Eventually, she moved back to her hometown of Akron, Ohio. She and her mother have since taken up tracking reports of sightings of her face on L'Oreal boxes in far-flung countries including France, Spain, Portugal, and Turkey, which she says are the results of licensing deals made without her knowledge using photos from a long-ago shoot.

The lawsuit seeks damages for wage theft, breach of contract, and minimum wage violations, and a full accounting for all the models.

The agencies have all tried to convince a Manhattan Supreme Court judge to throw out the suit. Instead, he's directed Attorney General Eric Schneiderman to concurrently probe the claims.

The firm Wilhelmina Models claims in a legal motion that all who worked for it have been paid in full, and that at least some of the claims are beyond the statute of limitations. Speaking to the New York Post, a lawyer for Click belittled the plaintiffs as bitter has-beens. Click was one of several agencies that settled an antitrust lawsuit claiming rate-fixing and model exploitation across the industry back in 2005 for $22 million. Speaking to the New York Observer then, Click lawyer Aaron Golub said, "I can’t wait to take them on again. The next time around, they’ll get zero."