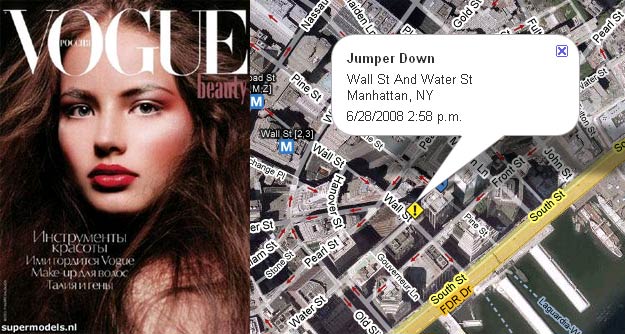 Police believe that a 20-year-old woman committed suicide by jumping out of her Water Street apartment's balcony around 2:30 p.m. yesterday afternoon. The woman was identified as Kazhakstan model Ruslana Korshunova. 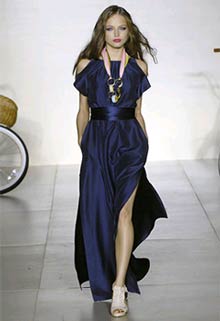 Newsday reported, "It appeared she fell from the balcony of her ninth-floor apartment, police said, where a large hole was visible in construction netting hanging on the front of the 12-story building." A Con Ed worker, who had been talking to a cop at the time, told the Post, "I heard what sounded like a gunshot or a bomb or an explosion...I looked down the street, and I say to the cop, 'Did that person just get hit by a car?'"

Another person told the Daily News, "All I saw was something moving out of the corner of my eye, and then boom. It sounded like a bass drum when she hit the ground." No one on Water Street was hurt.

The building's doorman Mahmoud Nakeeb described Korshunova, who had modeled for DKNY, Marc Jacobs, Jill Stuart, Vera Wang, Lela Rose, and others, as "sweet" and "always smiling." He added that she moved in two months ago. A friend spoke to the Post and said the model had just returned from a job in Paris, "The world lost a great person...There were no signs. That's what's driving me crazy. I don't see one reason why she would do that."

The ME's office will determine a cause of death; per Newsday, a police source said there were no signs of a struggle and it's "unclear if anyone else was in the apartment at the time of the fall or if a suicide note was found." According to British Vogue, Korshunova was discovered in 2003, when a booker was reading an in-flight magazine feature about her hometown, "I saw her by chance and she looked like something out of a fairytale!"