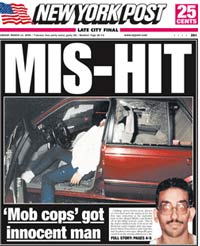 Louis Eppolito, who was accused of moonlighting as one half of a mafia hit squad, has expressed his displeasure with the bad press he's been getting. In a letter to the Associated Press, penned from prison, Eppolito said that the coverage surrounding his and his partner's case was a "media circus" and contributed to his continued imprisonment despite the fact that his conviction was overturned by a judge.

58-year-old Eppolito and fellow policeman Stephen Caracappa, were accused of murdering eight men while they were cops, but accepting payments from a mob family. The two are accused of accepting $65,000 per hit and receiving a $4,000 monthly retainer by the Luchese crime family. Not only were they allegedly corrupt, but also somewhat inept. During their trial, it was revealed that a completely disinterested man was killed in his driveway by a mob hit team after Eppolito and Caracappa provided the wrong address for an intended target.

After Eppolito and Caracappa were convicted by a jury, the trial judge set aside the guilty verdict because he said that the court proceedings occurred after the statute of limitations had expired. The two remain jailed in Brooklyn and Eppolito, at least, is asking to be freed on bail while awaiting retrial. He blames the media's depiction of the pair as corrupt cops as the reason for his continued imprisonment.