London Rene, the boyfriend of reality TV star Natalie Guerico, says that after he was slashed and stabbed with a boxcutter outside Williamsburg club Output, he was able to grab his assailant and hand him over to the nightclub's security team. "I gave the person that did this to my face over to security," Rene tells PIX11. "I told them to please hold on to him and that I’m pressing charges and calling the police and they let him go."

Output has not responded to multiple inquiries about the incident, which took place shortly after 3 a.m. on Sunday morning. Rene and Guercio say they had just exited the club when Rene was attacked by a man with a box cutter.

"Out of a crowd without me knowing what’s going on a man runs out and slices the front of my face,” Rene told PIX11. "I didn’t know he was coming until the damage was already done. It happened so fast, then I was on the ground. Everyone was on the ground, there was blood and it was like over a minute and a half before anyone came to help.”

Rene was rushed to Woodhull Hospital, where he received over 200 stitches for cuts to his face, arm, and torso. He later received plastic surgery at a New Jersey hospital, where Guerico shared this photo on Instagram (dutifully including @MobWives @VH1 in her comment):

Last night the NYPD released a photo of the man they say is the suspect: Rodolfo "Rudy" Lopez, whom police describe as an Hispanic male, approximately 5'9", 200 lbs. with short, black hair. Police sources tell the Post that Lopez is an acquaintance of Rene. 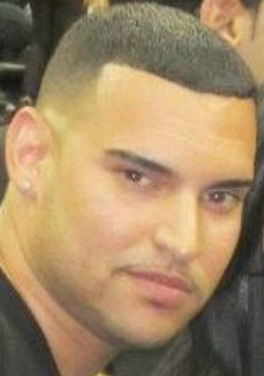 Rene and Guercio say they've been accused of "snitching" for cooperating with police.

When u are a victim of a crime, it's NOT called snitching, It's called doing the right thing. http://t.co/itzveG8Q28 @LondonUKRene

Anyone with information in regard to this incident and/or the whereabouts of the suspect is asked to call Crime Stoppers at 1-800-577-TIPS (8477). The public can also submit tips by logging onto the Crime Stoppers website or by texting their tips to 274637 (CRIMES) then enter TIP577. All calls are strictly confidential.

#brooklyn
#london rene
#mob wives
#natalie guercio
#output
#williamsburg
Do you know the scoop? Comment below or Send us a Tip