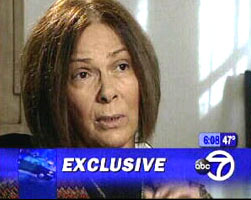 Over a week ago, prosecutors were forced to drop charges against ex-FBI agent R. Lindley DeVecchio after their star witness's credibility came into question. DeVecchio's trial was as high-profile as they come, as the Brooklyn DA's office charged him with tipping off mobster-turned-FBI information Gregory "The Grim Reaper" Scarpa Jr. with information that led to four murders, and their case hinged on the testimony of Scarpa's mistress, Linda Schiro.

In late October, Schiro had testified that DeVecchio was the one who gave Scarpa the information, but veteran crime reporters Tom Robbins and Jerry Capeci realized that her words contradicted interviews they conducted with Schiro in 1997 - and had the audiotapes to prove it. The case against DeVecchio ended in dramatic fashion, with charges being dismissed (and what's worse, it seemed that DeVecchio may have been involved in at least one murder), and now Schiro is being investigated for perjury.

Schiro spoke to WABC 7, insisting that her courtroom testimony againts DeVecchio was true. She said of the DA's office cutting her loose as a cooperating witness, "I'm sick over it, very sick. I have you know, and I'm hurting because like I said, I can't believe what they did." (The Brooklyn DA's office had been paying her $2,200/month since March 2006 for food and rent.) And regarding possible perjury charges, "I don't understand how they would, because first of all, I told the truth. They knew about everything before that." Schiro also justified how she could deal with the killing, "A mafia mistress, I grew up with gangsters, ok. What he did on the outside, like I said, you're a lawyer, you're a writer, this is your job. What he did on the outside, that was his job."

Tom Robbins, who now writes for the Village Voice, has a great article on how the audiotapes came to unravel the DA's case, while Jerry Capeci, who has a column at Gang Land News, explains the fallout from Schiro's testimony.