Treasury Secretary Steve Mnuchin is pushing back against reports that he requested a military jet to take him and his wife, Louise Linton on their European honeymoon over the summer. (He says it's #FakeNews.) But his love of government planes isn't new—Mnuchin has also been criticized for a trip he and Linton took on a government jet to Kentucky last month, in which they reportedly watched the solar eclipse from Fort Knox. Mnuchin says that story is also ridiculous. "Being a New Yorker, I don’t have any interest in watching the eclipse," he said. Indeed, just look at these tourists clogging the city with their stupid curiosity about an extraordinary celestial event that cost U.S. employers millions in lost productivity: 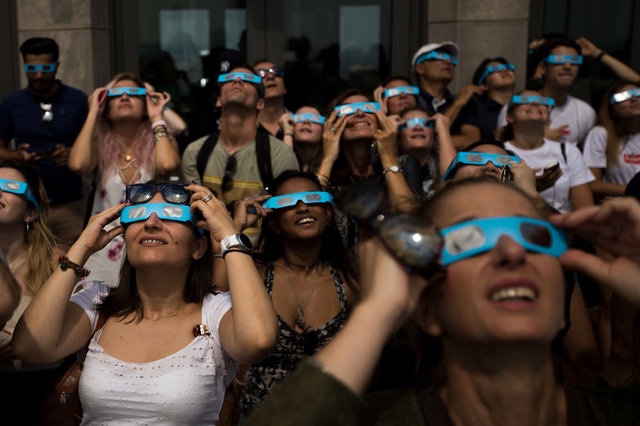 Mnuchin told Politico the Treasury Department considered lending him the government plane so he'd have access to "secure communications channels" while overseas, not so he'd get a trip on the government's dime. "Let me be clear: I’m very sensitive to the use of government funds," he said. “I’ve never asked the government to pay for my personal travel, and this was purely about alternatives of how I’d be able to be involved for national security.”

As for the trip to Kentucky—which was so maligned at the time that Linton got into an argument over it with an Instagram commenter—Mnuchin claims he took it discuss tax policy with Senate Majority Leader Mitch McConnell and to visit Fort Knox. It just so happened that Kentucky was in the path of the total solar eclipse at the time, not that urbane New Yorkers give a crap about a once-in-a-lifetime astronomical phenomenon. “People in Kentucky took this stuff very seriously," Mnuchin said. Rubes!

Back in New York, which wasn't even in the eclipse path of totality, it sure seemed like a big deal. Stores ran out of eclipse glasses, for instance; people piled out of their office buildings to see the eclipse firsthand, and this guide I wrote about how and where to watch the eclipse was the top Gothamist story of the day. Of course, most Gothamist readers live in Ohio.

Anyway, Mnuchin thought the eclipse was dumb, and also scary. "We got there, I was like, 'Really? I don't have any interest in watching the eclipse,'" Mnuchin said. "I put on the glasses, they're like paper glasses. I'm like, 'I'm worried I'm going to get my eyes burned out.' I put it on for like two seconds. That was the end of my interest in the eclipse." What a waste of taxpayer dollars! The Treasury Department's Inspector General is reviewing the requests for government aircraft.