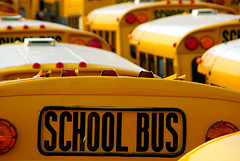 The Dept. of Education is claiming that it was simply a mix-up in recordkeeping that led to a failure to hand over a few hundred cases of abuse and misconduct that occurred on city school buses when the Daily News was investigating chaotic situations as kids rode to and from school. Six months ago, the News began a series of articles titled "School Bus Disgrace," detailing the horrors kids face when dealing with bus drivers and monitors. The Dept. of Education recently handed over another 225 complaints that the News alleges it was hiding to keep safety numbers artificially low.

One standout complaint involved a driver who used a school bus and wore his official uniform while playing a film character who smokes marijuana, drinks beer, and has sex while on duty as a bus driver. Another was an incident where a driver and a bus monitor conspired to cover up a razor attack on an eleven-year-old boy.

The News found that many of the recently uncovered cases were in fact substantiated complaints that resulted in the decertification of bus drivers. Other complaints classified as unsubstantiated were simply cases that had not been investigated. The original "School Bus Disgrace" series led the Dept. of Education to admit that its complaint investigation unit was in chaos, with only seven investigators looking into almost 3,500 incidents. Despite a rising number of complaints, the number of investigators has remained stable, although the state assembly passed a bill requiring cameras in all school buses that is pending in the state senate.