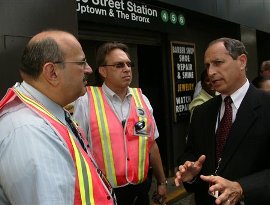 Yesterday, MTA CEO and executive director Lee Sander took the case for subway and bus fare hikes to the people by standing at the Grand Central shuttle platform yesterday morning. The MTA has argued that with looming billion-dollar deficits, fare hikes, as well as agency cuts, are the only way for the MTA to stay afloat without trimming service. According to the NY Times, very few people stopped to talk to Sander who was handing out a leaflet called "The Fare Facts" which cited "growing pension and debt service costs" as why fares should go up.

The people who did stop were skeptical or resigned. The Post reports that one man yelled, "Keep the fares down, bastard!" at Sander. (To enjoy how the Post differs from the NY Times, this is how the NY Times reported the suggestion: A man in a green shirt walked by and shouted, “Keep the fare down,” punctuating his comment with a vulgarity.)

At any rate, advertising "guru" Jerry Della Femina thinks that Sander was smart to make his case in person, "It's effective. The public hates it when Con Ed spends a lot on advertising to tell you why they screwed up." True, but given that the subways and buses have so much advertising space (and you've seen those ads for movies/TV show premieres that have already passed!), couldn't the MTA speak to its constituents directly with a campaign in the subways and buses? Related: Second Avenue Sagas looked at the history of subway advertising.

As for the increase itself, the Post generally finds that subway fare increases have been under inflation - when you use an average fare of $1.30 (with Metrocard discount). The NY Times' Clyde Haberman has a Times Select-only column about the pizza slice index: When subway/bus fares go up, so does the price of pizza. Damn you, ethanol, milk and rent increases!