Now that Rick Santorum is out of the race and concentrating on making his ailing three-year-old daughter a lifetime NRA member, likely Republican presidential nominee Mitt Romney is very confident in an interview with ABC News' Diane Sawyer. He says that President Obama should "start packing." Ann Romney, cause celebre/"daughter of privilege", added, "I believe it’s… Mitt’s time… It’s our turn now."

Romney claims that Obama's "policies have not helped the American people. They have not helped get jobs, they have not helped raise incomes and they’ve added trillions of dollars of debt" and insists that he can relate to working class people, in spite of being extremely wealthy, so much so that one of his homes in LaJolla, California will have an elevator for his cars in the garage. Romney said, "We don’t divide America based upon success and wealth and other dimensions of that nature. We’re one nation under God …. This is a time when people of different backgrounds and different experiences need to come together." But our tax policies divide people.

As for Obama's suggestion that Romney release 12 years of tax returns, Romney said no way, "The president is going to try and do everything possible to divert from the attention being focused upon his record as president and the failure of his economic policies. So he’s going to try to make this campaign about the fact that I’ve been successful, that I’ve made a lot of money." Well, Romney did release 23 years worth of returns to John McCain in 2008 when McCain's campaign was vetting him as a VP possibility—when will those surface? 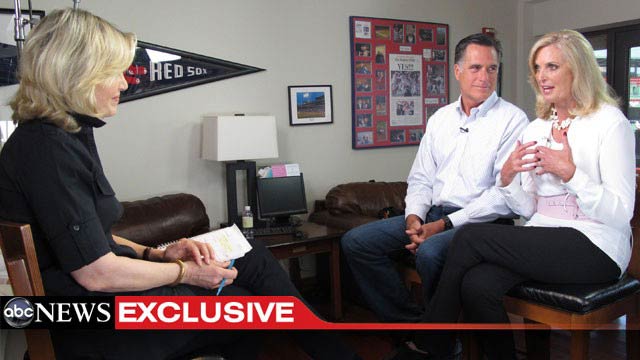 Sawyer also asked Ann Romney about her comments that Democratic strategist Hilary Rosen's remarks were a "birthday gift." (Rosen said that Ann Romney "has actually never worked a day in her life" which is technically true, but Ann Romney took to Twitter to say, "I made a choice to stay home and raise five boys"). The candidate's wife told Sawyer, "That wasn’t how I meant it. It was a birthday gift to me because I love the fact that we’re talking about this."

Hmm, well, Rosen's full remarks were, "Guess what, his wife has actually never worked a day in her life. She's never really dealt with the kinds of economic issues that a majority of the women in this country are facing in terms of how do we feed our kids, how do we send them to school and how do we -- why do we worry about their future?" And Ann Romney herself said in 1994 that she and her husband were living off the sale of some stock (funded by his father), "No, I did not work. Mitt thought it was important for me to stay home with the children, and I was delighted."

#ann romney
#election 2012
#mitt romney
#president obama
#taxes
#wealthy
Do you know the scoop? Comment below or Send us a Tip