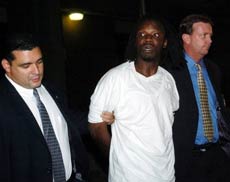 The third trial for the men accused of killing police officer Russel Timoshenko has ended in mistrial. According to the NY Post, "a female juror, who had reported health palpitations and high blood pressure on Friday morning, said that she was unable to resume deliberations until she underwent more tests."

The defendant, Lee Woods, did not agree to allow an alternate juror to substitute in. His lawyer said, "He is upset in the first instance because he wanted a verdict. He wanted to see this through...However, the jury that he wanted, including that juror, was unable to continue."

Woods and friends Robert Ellis and Dexter Bostic had been in a SUV when Timoshenko and Police Officer Herman Yan stopped them (the cops noticed their plates were stolen; the three suspects also had illegal weapons in the vehicle). Timoshenko was fatally shot twice in the head while Yan survived being shot in the arm and chest. Last week, Ellis was acquitted of murder while Bostic was found guilty of murder.

Woods' retrial will begin on January 14.