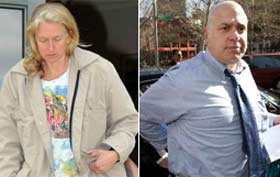 Authorities arrested the girlfriend of the fugitive hedge fund scammer yesterday. Debra Ryan reportedly confessed that she helped Sam Israel, who was sentenced to 20 years in prison for swindling hundreds of millions from investors, plan his disappearance a week and a half ago.

On June 10, Israel was supposed to report to a federal correctional facility in Massachusetts, but his empty GMC Envoy was found on the Bear Mountain Bridge. The words "suicide is painless" were written on the dusty hood, but authorities quickly suspected Israel was on the lam.

Ryan, who lived with Israel in a rented Armonk home, apparently told investigators she helped him pack up an RV full of supplies and a motor scooter, which Israel parked on a highway. It is believed a different person picked Israel from the bridge and drove him to the RV. She had previously claimed she had no idea where Israel was when questioned and even gave authorities a suicide note written by Israel. She was released on $75,000 bond and and may face up to 10 years in prison if convicted.

It turns out the person who sold the RV to Israel tipped off the authorities. The seller, who was paid in cash and agreed to let Israel keep the old plates for a while, came forward when he saw pictures of Israel on the news. The RV is a white Coachman Freelander, with the plates EEN-5973. Per the Post, "Authorities said Israel could be hiding out at an RV park, campground or highway rest area...using the aliases Sam Ryan or David Clapp, and has a tattoo of a bird on his left arm...He should be considered armed and dangerous."