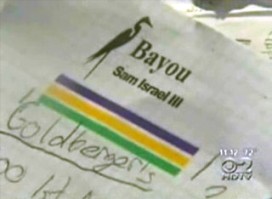 A bench warrant was issued for the arrest of Samuel Israel III, the hedge fund founder who was convicted of scamming investors of $450 million. Israel was supposed to report for a 20-year prison sentence in Massachusetts on Monday, but instead, his empty car was found on the Bear Mountain Bridge with "Suicide is painless" written on the hood.

Speculation is high that Israel staged his death. NY State police investigator Bruce Cuccia said, "It looks like it could be either a suicide or a staged suicide, a fake suicide. Without a body, we don't have conclusive evidence either way." He added that it could take up to a week for a body to appear and wondered why Israel would be driving himself to prison, "What, do they have valet parking? It's 20 years. What's he going to do, park it?"

A police source told the Post, "We're not searching [the river] because it's widely presumed that he didn't jump." A lawyer for investors who lost money with Israel's Bayou Hedge Fund, Ross Intelisano, also expressed his skepticism to WCBS 2, "We have no idea how much money he stashed away. Until a body is produced I don't think anyone's going to believe he committed suicide." (Israel had been living in a $32,000/month rented Westchester mansion.) And scam victim Charles Gradanate believes "this could be his last, greatest con."

According to Inkling Markets, many believe he's in the Caymans or on the run [via Dealbreaker].

#convict
#hedge fund
#mystery
#sam israel
#samuel israel
#staged suicide
#suicide
Do you know the scoop? Comment below or Send us a Tip