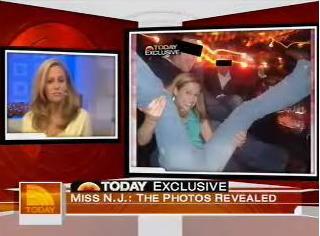 Incoming freshmen at Wagner College got some advice about Facebook and other Internet do's and don't's from someone who knows firsthand about how things can go out of control when fun pictures posted on a website get into the wrong hand: Miss NJ Amy Polumbo.

Polumbo's Miss NJ crown was in jeopardy when some Facebook photographs were sent to NJ pageant officials. Eventually, the Wagner senior was allowed to keep her crown, but Polumbo appeared on the Today show to reveal the "racy" photographs and called her behavior foolish and unladylike but not as controversial as suspected.

During the discussion with freshman, Polumbo said, "I wasn't planning to become a national icon for Internet safety Now I'll always be known as the girl with the crazy college pictures." She warned that one should never post anything online that you wouldn't want people, including future employers, to see as well as to be wary of who you accept as "friends." "Your years of college will fly by quickly, but the Internet is forever."