It seems benign enough: a dial-in hotline where moms can get advice on potty training and recipe ideas. But in the five months since the measles outbreak began in New York City, the Akeres Habayis Hotline has taken on a different meaning and a different purpose, serving as a telephonic hub for ultra-Orthodox mothers who are resistant to vaccinating their children.

One of the groups that uses a section of the hotline is called PEACH, or Parents Educating and Advocating for Children’s Health. Two years ago, the group, whose members are anonymous, published a 40-page manual outlining the supposed dangers of vaccines and was reportedly circulating it in some communities when the current measles outbreak began last fall. Now it is using the conference calls as another means to organize anti-vaccination adherents, spread their message, and even try to form underground schools of unvaccinated children.

Every few weeks, the PEACH group hosts a seemingly spontaneous conference call. It’s announced on their Twitter feed with a dial in number just a few minutes before it starts. Moms call in to ask questions, trade tips on getting sick kids through the measles, and retell second and third-hand anecdotes about supposedly damaging side-effects of vaccines. The sounds of their lives are the backdrop to these calls; babies cry and fuss, pots and pans clank. Many seem fearful and have questions about what’s best for their kids.

One woman recently recounted that an acquaintance told her she had a playgroup where a once lively 4-year-old became unusually quiet and reserved.

“He was like a totally different kid and she asked the mother, ‘What happened to this child. He’s not the same?’” the caller said. The parent’s mother responded that the boy had just gotten vaccinated.

“We’ve seen children who just like don’t talk as much anymore, they seem a little spaced out,” the caller continued. “And that could be from I would say the aluminum in the vaccine.”

Another woman then asked, “It don’t go away?”

The first woman answered, “No, it doesn’t always. Those symptoms can stay with the child for life.”

Some vaccines do have aluminum in them, though not the measles, mumps and rubella vaccine, known as “MMR.” Vaccines with aluminum adjuvant like all vaccines are extensively tested before use and have a six-decade record of working safely and effectively, with a few rare exceptions, according to the Food and Drug Administration.

The calls boast hundreds of concerned mothers who are instructed not to divulge where they live, though certain outposts of the ultra-Orthodox community like Brooklyn, Monsey and Lakewood New Jersey, come up in conversation. Some of these calls are archived on the Akeres Habayis Hotline. (The name in Yiddish means “mainstay of the home.”) Gothamist/WNYC listened through hours of them for this story.

The organizers of the conference call invite doctors, rabbis and lawyers as special guests. One of them, Dr. Toni Bark, a licensed physician in Illinois, is opposed to vaccines and has testified against them all over the country. In one 2017 case in Michigan, Bark asserted she was an expert in “adversomics,” which she said was the study of adverse impacts of vaccines. However, the judge rejected her as an expert in that area because she couldn’t prove she had published any papers on the subject. The judge also discounted Dr. Bark’s expertise on immunology and confined her testimony to her experience in her practice.

In her appearance on a PEACH conference call late last year, Dr. Bark was asked if measles was a “very dangerous virus.”.

She also said that she believed there was a connection between autism and MMR, a theory posited by British doctor Andrew Wakefield in 1998. His study, however, consisted of evaluating just 12 children with autism and was later retracted. Wakefield was barred from practicing medicine in England. Just last week, a study published in the Annals of Internal Medicine looking at 657,461 children in Denmark over a decade found that there was no correlation between autism and the MMR vaccine.

When reached by Gothamist/WNYC about the conference call, Bark stood by her comments. She said that she told the women that if they are afraid of the measles, they should get their children vaccinated.

Another doctor who took questions on a PEACH conference call was Binyamin Rothstein. He was introduced as having a board certification in family practice in Pennsylvania, which is accurate, though he’s on probation. His license was revoked in Maryland and New York after investigators found he repeatedly injected patients with hydrogen peroxide and a vitamin cocktail rather than adequately diagnosing and treating a host of ailments including tuberculosis, seizures and pneumonia. (One 72-year-old patient died of a heart attack shortly after seeing him for trouble breathing, chest pain and fainting spells.) Maryland’s State Board of Physicians determined that he was “not capable of being re-educated and [would] pose a danger to the public if allowed to continue to practice.”

On one of his websites, Dr. Rothstein wrote that his patients hadn’t complained. “These patients were helped when traditional therapies had failed them,” he said. Two of his former patients who had been cited in the Maryland case testified on his behalf in Pennsylvania, according to records there.

On his call with PEACH moms, one woman asks about her sister’s baby, who she explained had developed a chronic barking cough two weeks after getting shots at three months old. She said the baby’s doctor had told her sister it wasn’t related to the vaccine.

“No doctor in his or her right mind is gonna say, ‘The shot I told you your kid should take now caused permanent damage to your child.’ No one’s gonna say that,” Dr. Rothstein said. “So, of course they’re gonna deny it.”

When reached for comment Rothstein contested certain parts of the Maryland investigation and added he wasn’t opposed to vaccines, “but we do need to determine which subset of patients are at risk for untoward side effects so that they can be administered safely and responsibly."

The woman who leads the PEACH conference calls is Chany Silber. A petite woman who appears to be in her forties, she lives with her family in a modest two-story home on a quiet street in Borough Park. When Gothamist/WNYC rang her bell recently, she said some of her children are vaccinated and attending school while the rest aren’t and are at home, abiding by the Health Department’s orders.

While she said she was not interested in being interviewed, Silber did make some comments illuminating her perspective.

“Listen, nobody died. Nobody’s dying,” she said. When told that people did die frequently before the vaccine became widespread, she responded, “That’s not what my mother-in-law told me,” and before slamming the door added, “The CDC says a lot of fake things.” 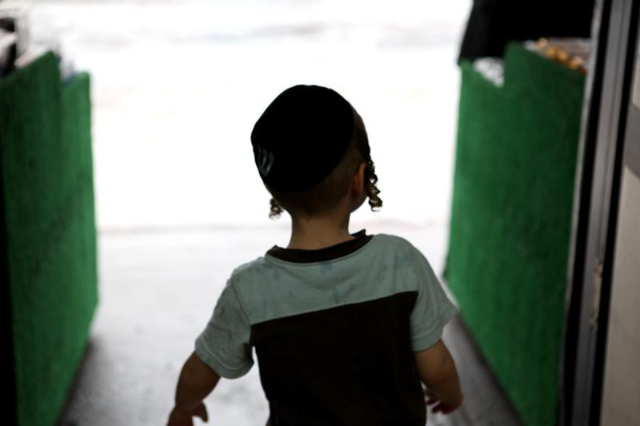 Unvaccinated kids in Brooklyn have not been allowed to attend yeshivas in certain Williamsburg and Borough Park zip codes since mid-December, when the New York City Department of Health and Mental Hygiene ordered that they remain at home until it declares the outbreak is over. In the meantime, the Akeres Habayis Hotline has apparently been used to form home schools; the phone tree asks unvaccinated parents to leave their information if they are interested. It is not clear, however, if any groups have been formed; though clusters of unvaccinated children would subvert the purpose of the Health Department’s exclusionary order.

The conference call participants even pooled funds to hire an attorney, Charles Nicholas, to file a lawsuit against the yeshivas to let their kids back into school. Nicholas spoke to Gothamist/WNYC about the conference call; he said he has since then determined there isn’t legal grounds for a lawsuit, and that he did not take their money.

There are some fragments of truth in what’s discussed on the PEACH conference calls. Vaccines can cause complications: seizures, brain damage and even death. However, they are extremely rare. According to the government’s Vaccine Adverse Events Reporting System, there have been 459 suspected deaths linked to the MMR vaccine going back to 1989, out of the tens of millions of doses that have been administered in that time period. According to the vaccine’s manufacturer, approximately one in three million doses results in brain swelling or encephalitis.

Public health experts warn that parents must weigh the miniscule risks of the vaccine against the much larger dangers of going unvaccinated. Two in 1,000 measles cases results in death; one in 1,000 cases results in encephalitis, according to the U.S. Centers for Disease Control and Prevention. Before the vaccine was introduced in 1963, there were an average of more than 400 deaths each year from the virus, according to the CDC. These days deaths from measles are rare in the U.S. The last one was in 2015 in Washington State. Public health experts acknowledge that improvements in nutrition and health care make it less likely that one dies of the disease, but argue that the decrease in mortality is largely due to the country’s high vaccination rate.

Although no measles deaths have been reported in NYC as of March 5th, there have been 133 measles cases since the outbreak began last October. Of those, 109 were unvaccinated patients, including 21 babies who were too young for routine vaccination. Twenty-two cases either had only one dose of the MMR vaccine or didn’t know their vaccine history. In two cases, the person had received two doses of the MMR vaccine. Eight patients were hospitalized and one was sent to intensive care, and while all have since recovered, though in some cases complications can occur years down the line.

The vast majority of ultra-Orthodox residents in Brooklyn are vaccinated, according to Dr. Demetre Daskalakis, the deputy commissioner of disease control at the City’s Department of Health and Mental Hygiene. But there are holdouts, an estimated 1,800 kids, he said. But the ultra-Orthodox community is particularly vulnerable to the spread of this virus; according to public health officials, they tend to have larger families, may live in cramped conditions, and frequently travel to and from Israel, where more than 3,400 people have had the measles since last March, according to Israel’s Ministry of Health. Two people have died there.

“At the end of the day measles can kill you,” he said. “In terms of harm reduction and risk reduction, the vaccine is a really simple way to quell those fears.”

Correction: This article has been updated to reflect a 2017 case, which Dr. Bark provided testimony for, was in Michigan and not California as previously stated. A comment from Dr. Binyamin Rothstein has been added.

#borough park
#brooklyn
#cdc
#measles
#ultra-orthodox
#vaccinations
#original
Do you know the scoop? Comment below or Send us a Tip