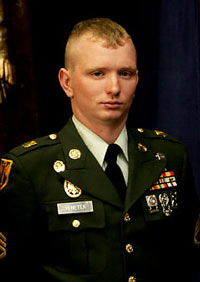 Patrick Venetek, the cop whose service weapon wound up shooting through the ceiling of his downstairs neighbors' apartment and striking an 18-month-old's arm, gave further details on how the incident occurred. Perhaps to the relief of Porcellini's six brothers and sisters, Venetek has been stripped of his badge and gun at this time and is on modified duty.

Apparently, Ventek was going to start cleaning his 9 mm semi-automatic pistol in the dwindling natural light of a winter afternoon (natural light because Con Ed had shut off his electricity). Venetek placed the pistol on the table where he was going to clean it. Hunger struck first and he went to make a sandwich in the kitchen. Returning to the table with his sandwich, and possibly because of the dim light, he bumped into the table forcefully enough to knock the weapon to the ground, where it discharged, sending a bullet downstairs, through the floor-ceiling and through the arm of little Jonathan Porcellini, who was sitting in his playpen.

Venetek's brother, who shares the apartment with Patrick, described the situation as a freak accident and explained why their electricity was off: "On a cop's salary, we're f---ing poor. I clean sewers and he's a cop. Rent was more important [than electricity]." Venetek has only been on the force for two years, and many have complained about the low starting salaries of NYPD rookies. Amidst the piles of stacked empty beer cans and cigarette butts Thursday night, police investigators sought to figure out exactly what happened.

The boy's father, Justin Porcellini, was less than impressed with any rationalizations, contemplating that for just a few inches, he could have lost his son, instead of bringing him home later Thursday night from Brookdale University Hospital. "This is a city employee who didn't take his job seriously. It could've been worse. We're lucky nothing else happened." Jonathan will have to make daily return trips to the hospital to have his wound cleaned and will eventually require plastic surgery to fully repair the bullet wound's damage.

The Porcellinis have already contacted a lawyer and are considering legal action against Venetek, an Army veteran who served in a unit that guarded the Abu Ghraib prison in Iraq (after reports of abuse at the facility were exposed), and also against the city. Although, off-duty at the time, the News spoke to legal experts who said Venetek could be found guilty of negligence and the city could be held liable for damages.

Photo of Patrick Venetek via the Daily News