The Daily News visited the premature baby of the traffic agent killed by an out-of-control van last week. Sean Michael Justin Sanz was born 2 months premature, "but doctors say he's a fighter and is expected to live." The father, Rafael Sanz, is mourning his wife Donnette's sudden death, "She was looking forward to the birth so much. That's all she would talk about was her son."

But he reflected on how an estimated 30 people lifted a school bus to free her, "If Donnette were here now, she'd be really happy that so many New Yorkers tried to save her. I want to thank them too. They always will be in my heart." The van's driver, who did not have a license, was charged with criminally negligent homicide.

Update Now it's reported that baby Sean Michael has passed away; the News reports a traffic agents union official said, "They just pulled the respirator. They might bury him with the mother." Too sad--Donnette Sanz's funeral is planned for Monday. 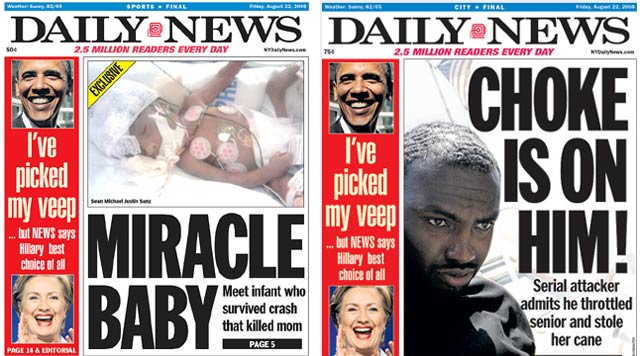 And the Daily News had featured Sean Michael on its cover, but now the cover appears to have reverted to a version without him on it.

#bronx
#Donnette Sanz
#miracle baby
#premature baby
Do you know the scoop? Comment below or Send us a Tip
A new Gothamist is coming! We’ve moved comments over to our beta site. Click here to join the conversation and get a preview of our new website.