Minority Groups: NYC Is Letting Hasids Shut Us Out Of Brooklyn Housing

The battle over affordable housing on the border of Williamsburg and Bed-Stuy that has dragged out for decades exploded again this week as community groups and politicians alleged Hasidic developers of blatant discrimination against black and Latinos after they were denied applications to live in new apartments.

The groups allege that the new apartment buildings at 70 Union Avenue and 246 Lynch Street have been filled with Hasidim, and that other members of the community have been shut out of the application process.

"We've seen our worst fears playing out into reality," said Malcolm Sanborn-Hum, Director of Legislation and Communications for councilwoman Diana Reyna. Reyna spoke out against the discrimination yesterday morning in front of City Hall, after community members reported that they had been denied applications to privately owned apartment buildings in the Broadway Triangle, a blatant violation of the Fair Housing Act.

"In the past few months, apartments are being rented and sold strictly to Hasidic residents—what we've been arguing the past few years is now coming to life," Sanborn-Hum said.

The State Attorney General's office says they've looked into the preferential treatment received by Hasidim, and the Human Rights Commission of New York City has been in contact with community groups about their allegations.

The development of housing at The Broadway Triangle, located between the predominantly white Community District 1 (Greenpoint and Williamsburg) and the overwhelmingly black and Latino Community District 3 (Bed-Stuy), has long been a contentious, bungled process, filled with all the trademarks of municipal corruption: back room deals, no-bid contracts, and shameless race-baiting. A 2011 court injunction stopped construction on the large plot of city-owned land after it found that the plans for affordable housing would cater strictly to Hasidic families. 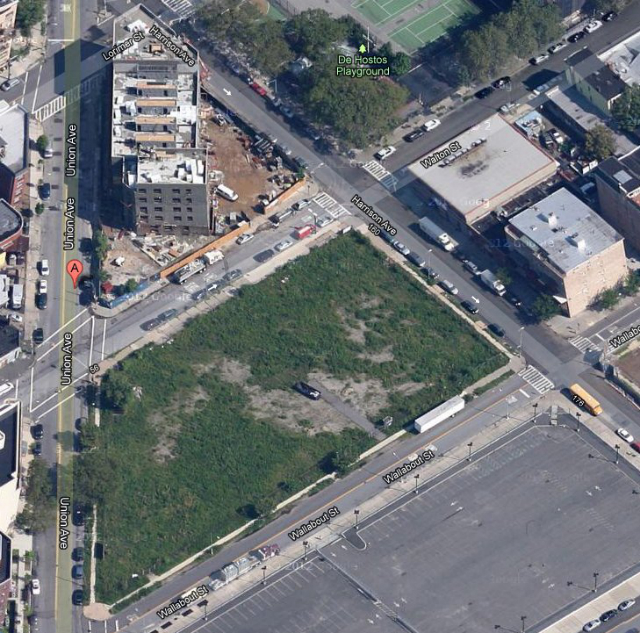 After taking office in 2002, the Bloomberg administration had made developing affordable housing at the Broadway Triangle a major priority, reaching out to both Hasidic and minority groups to try to fashion a plan that would be amenable to everyone.

Development czar and then-Deputy Mayor Dan Doctoroff reportedly said after one planning session that, "Nobody is going to be happy with the result." The city was caught between the powerful Hasidic voting bloc and the Brooklyn political machine, led by now-disgraced Democratic leader Vito Lopez. The Bloomberg administration found very little traction for their plans, which included rezoning the Triangle for residential use, until Lopez, in a moment of political vulnerability, flipped to the side of the Hasidic coalition in order to win their votes.

Lopez then signed off on a plan that would build low-rise buildings with large apartments, a development plan that would make sense for large Hasidic families who cannot use elevators on the Sabbath, and less viable for the smaller minority families of Bedford-Stuyvesant.

"His decision was totally political, but the impact was racial," Marty Needleman, Chief Counsel of Brooklyn Legal Services Corporation A, said. Needleman represented community groups in their 2011 case against the city.

The city, now no longer having to choose between Hasids and the Brooklyn Democrats, gave out a no-bid contract to two non-profits to develop the affordable housing—the powerful United Jewish Organizations of Williamsburg, which works in the predominantly Yiddish-speaking Williamsburg community; and the Ridgewood Bushwick Senior Citizens Council, a front organization for Lopez.

In 2011, a federal court found [PDF] that the "rezoning, and the designation of UJO and RBSCC in a no-bid process, to construct and design low rise buildings containing numerous large apartments, despite the general demand for smaller apartments, perpetuates segregation and disproportionately impacts a minority group or groups." A particularly egregious violation of the Fair Housing Act was the city's acknowledgement that the developers could fulfill their requirement of posting the availability of affordable housing in a Yiddish-only newspaper.

Since the injunction the city has yet to propose a new development plan, but that hasn't stopped private developers from constructing buildings on sites within the Broadway Triangle that weren't covered by the injunction (which only stopped construction on 20% of city-owned land).

The city stands by its original plan for redevelopment. Elizabeth Thomas, a spokeswoman for the Law Department, wrote in an email that "the allegations about the City's plan are wildly off-base. The proposed development plan will help meet the community's affordable housing needs while preserving the neighborhood's mid-rise physical scale."

Thomas added, "If private landlords are acting in a discriminatory manner, as is alleged, that is not to be tolerated, and concerned citizens should make a report to the authorities responsible for enforcing laws against discrimination."

Underlying the whole controversy is the city's admission that they never looked into the racial dynamic of the area. "In the 2011 hearings the city admitted that they never looked at possible racial discrimination, even though they are required to," NYCLU attorney Taylor Pendergrass, who worked on the 2011 case on behalf of the community groups, told us. "The city was ensuring that segregation in this community would continue."

The stalled development is likely to be handed over to the next mayor, who will either propose a new plan for development or persist in defending the existing one. A spokesman for the Mayor's Office declined to comment on the allegations of discrimination, or why it has taken so long for the city to reformulate a new plan.

"We have a few Hasidic groups joining with the minority groups to work together for affordable housing that's beneficial to everyone," Needleman said. "But the city has done nothing."