Millionaire Madam Mommy Is "The Most Vindictive B----," According To King Of All Pimps

The "soccer mom" accused of running of a multimillion high-end prostitution ring has a "crazy black book," according to the self-proclaimed "King of All Pimps." Jason Itzler, who is facing drug and prostitution charges, tells the Daily News that Anna Gristina is "the most vindictive b---- ever in the escorting game... She really is connected... When you control the hottest girls in the world, people kiss your ass." And he knows hot girls—he once employed Ashley Dupre!

Gristina, 44, denies the single prostitution charge and claims that she actually is struggling with bills, while the Manhattan DA's successfully argued for her to be held on $2 million bail and offered audiotapes of Gristina discussing money off-shore and claiming she had connections in law enforcement. It's also believed that her client list contains political figures, royalty, and others. Itzler, who had a bizarre incident at the Trump International Hotel, said, "I would expect she’s going to hurt a lot of people, smear their reputations. Some people should be like, ‘Man, I don’t want to be caught in her web,'" and everyone else "should sit back and enjoy the show." Can't wait! Oh, yeah, Eliot Spitzer denies tipping off Gristina to the investigation. 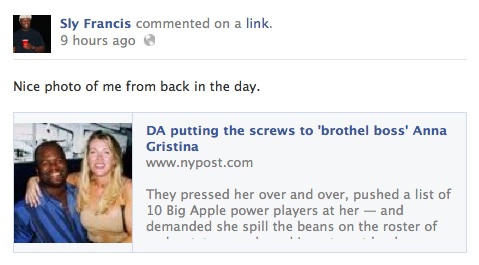 In the meantime, when the Post ran an old photograph of Gristina and her bodyguard yesterday, DNAinfo immediately pointed out the bodyguard was a retired NYPD detective who worked for the Manhattan DA's office. Then CityRoom said the photo "sent a shiver of recognition through the ranks of law enforcement."

Today, the Post claims an exclusive by giving details about the cop/bodyguard, who is identified as Sylvan "Sly" Francis:

The 54-year-old brute retired from the NYPD in 2002 after a decade in the department. One of his career highlights was working as a driver for a first deputy commissioner under Ray Kelly. Manhattan DA investigators learned of Francis’ involvement with Gristina only after seeing the photo in yesterday’s Post alongside an exclusive jailhouse interview with the madam — in which she revealed that prosecutors were desperately seeking dirt on 10 New York City powerbrokers. Now the DA is scrambling to determine whether Francis helped provide some of the law-enforcement protection she had bragged about on wiretaps...

The Manhattan DA’s Office was caught flat-footed by Francis’ involvement with Gristina — despite having investigated her for five years, sources said. "They just found out about this," said a law-enforcement source.