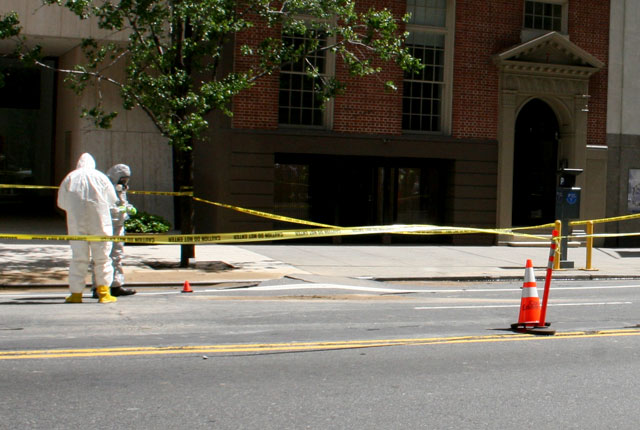 Yesterday, a water main broke on West 57th Street, between 5th and 6th Avenues, causing evacuations and a messy street. A witness described what it looked like to NY1, "I'm walking down the street and all of the sudden I see a little peak in the road, almost like the earth's crust lifted up. Then dirty water kept on spewing up and slowly filled the street."

An 85-year-old pipe burst, and a steam pipe was quickly shut off. The street closed, seven buildings were left without water, and one building--where the Fortunoff store is located--had "100 gallons of tainted water spilled inside" (that building's employees were not allowed back inside). The Department of Buildings inspected four buildings, finding that though there was water damage, they are structurally sound.

Con Edison cleaned up the street, which was able to partially reopen by yesterday afternoon, but they expect delays. And authorities will monitor the air for asbestos (the broken main may have, per the Times, "might have dislodged asbestos wrapping" of a steam pipe).

#con edison
#dep
#department of environmental protection
#water main break
#west 57th street
Do you know the scoop? Comment below or Send us a Tip
A new Gothamist is coming! We’ve moved comments over to our beta site. Click here to join the conversation and get a preview of our new website.