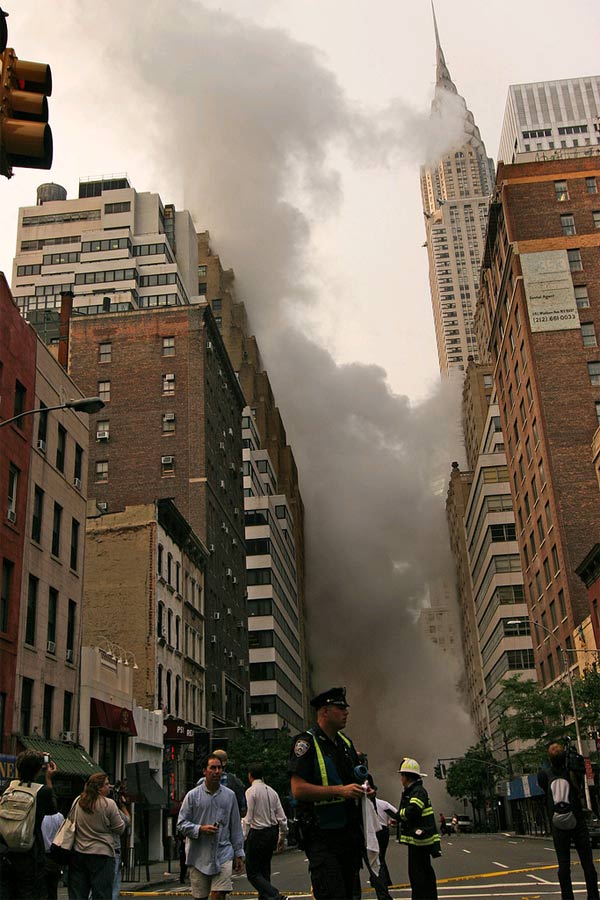 During the Wednesday-night rush hour, a steam pipe at 41st Street and Lexington Avenue exploded, sending steam, mud, and pieces of the street hundreds of feet into the air. One person died and at least 20 people were injured.

Initially, many people's first reactions were that it was a terrorist attack, what with the loud, thunder-like rumbling that shook buildings and the cloud of smoke and steam. People ran from the area of the explosion, evacuating their buildings and Grand Central Terminal in a rush. But about a half hour after the explosion (the first 911 call was reported at 5:57PM), NYPD confirmed that it was not a terrorist attack. Many people likened it to a volcano.

During a press conference last night, Mayor Bloomberg explained that the 24" pipe that had been installed back in 1924 and that it may have exploded because it came into contact with cold water. He also took time to praise New Yorkers, saying, "We couldn’t be prouder of our New Yorkers. The people that should respond knew exactly what to do and how to cooperate and work together, and the person in the street understood that we’re all here together and they knew not to panic. They rushed around, helped each other. It's what you would expect; it’s inspirational to all of us."

Asbestos, a known carcinogen, was a concern of city officials, but tests have come back showing no asbestos in the air, though some is present in the debris. Regular visitors to the area are familiar with steam vents and Con Ed workers along Lexington Avenue - here's a photograph of one of those steam pipes. It's unclear what the exact cause is so far, but we're sure we'll find out once the investigation is completed.

The City has created a "frozen zone" - 40th Street to 43rd Street between Vanderbilt Avenue and Third Avenue - and will not allow people to enter the zone (though people already in the zone may leave): "As clean-up work progresses, the city will work to shrink the size of the frozen zone." And the city urges people not to visit the zone. 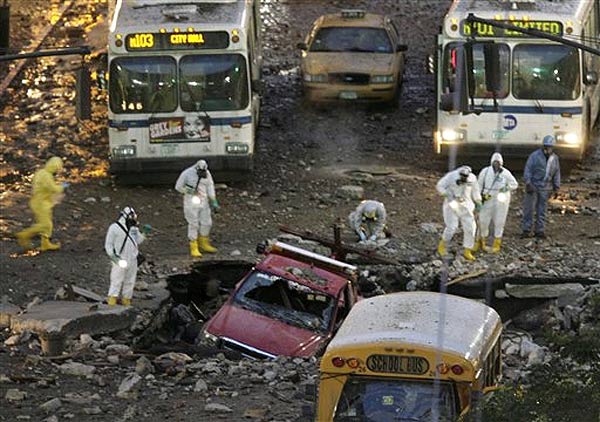 A crater about 15 feet by 25 feet in size was left after the explosion. The truck's driver is in a medically induced coma, with burns to 80% of his body. The school bus seen in the photographs belonged to Pierce Country Day Camp of Roslyn, L.I. - the Daily News reports "but luckily, the kids had been dropped off minutes earlier." The one fatality seems to be a woman who had a heart condition.

Subways, which were diverted last night, are running normally, with the exception of 4/5/6 and 7 service bypassing Grand Central and the S line being suspended. Buses with routes near the frozen zone are also affected. (Check MTA alerts here.)

The NY Times has an article on "Asbestos and Aging Pipes Remain Buried Hazards". One of our readers pointed out this was reminiscent of another deadly steam pipe explosion in Gramercy Park back in 1989.

Photograph at top by ~Raymond on Flickr; photograph at bottom of emergency responders inspecting the crater - and the red tow truck inside it - by Seth Wenig/AP