Midtown Steam Pipe Explosion:
Asbestos in Debris and What Con Ed Is Doing 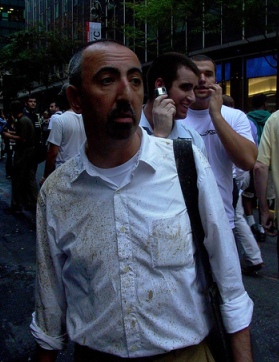 As we know, Con Edison and the New York City Department of Environmental Protection have confirmed that asbestos was found in debris after the steam pipe explosion at 41st Street and Lexington, but that there is no airborne asbestos. If you were in the area of the explosion and have contaminated clothing, Con Ed is actually accepting clothes and will dispose of them:

Anyone who was in that area around 6 p.m. who has dust or debris on clothing or belongings should put them in a plastic bag and bring it to the Con Edison customer service van parked at the corner of Madison Avenue and 42nd Street. The van will be at that location for the next several days from 7 a.m. to 9 p.m. Con Edison will arrange for the safe disposal of these items. Customer care personnel will be available to help people fill out a reimbursement request.

Con Ed's press release also states that they and the DEP have "developed a comprehensive plan to remove muddy debris from buildings, streets and vehicles." Let's hope. Con Ed is also asking Midtown East residents and businesses to reduce their use of electricity.

Back in 1989, when a steam pipe exploded near Gramercy Park, two Con Ed workers and a resident sleeping in her apartment were killed. (You can read a description of what happened in this article about a Georgia steam explosion - do a search for "New York City" to jump to the appropriate area.) Residents living in nearby buildings tested the debris, only to find traces of asbestos - which Con Ed didn't disclose in the first four days after the explosion. In 1994, the U.S. Attorney's office indicted Con Ed and Con Ed officials for not promptly reporting the presence of hazardous materials, as required by law. Con Ed pleaded guilty, was fined $2 million, and was put on probation (court-supervised monitor). Con Ed also spent $54 million to settle with private parties. Residents were also forced to leave their apartments for several months while the buildings were cleaned; many apartments were looted.

Here's more information about what asbestos is from the Department of Health: "Breathing in asbestos fibers over many years may result in serious diseases, such as lung cancer, digestive tract cancer, mesothelioma (a cancer in the lining of the lungs or abdomen), and/or asbestosis (lung scarring)."

Photograph by nparish on Flickr; nparish wrote, "this guy, Ken, says he was on a bus directly behind the section of pavement that exploded. he said the windows all blew out and people pushed their way out of the bus despite debris raining down on the roof. he put his briefcase over his head, left his other belongings, and ran out while hot dirty spray rained down. "