With his presidential campaign in full swing, some New Yorkers may feel like Mayor Bill de Blasio’s attention has been elsewhere. But a group of Billionaires’ Row residents seeking to prevent a homeless shelter from opening on West 58th Street has come up with a creative way to reach him: putting up billboards in Iowa.

“Hey, Bill de Blasio! It’s New York...Remember us?” reads a billboard that went up in Cedar Rapids on Thursday morning, which the group says may be one of many. The billboard goes on to list some unflattering statistics, saying, “61,000 New Yorkers are homeless” and “0% in the presidential polls.”

The billboard is in a “very high-traffic area where the mayor would be,” Michael Fischer, a representative of the West 58th Street Coalition, told reporters Thursday.

He said he got the idea for the sign when the power went out earlier this month and de Blasio was out of town. “He’s not walking down the streets, he’s not doing anything to help people, kids are eating lead paint off the walls in affordable housing buildings,” Fischer said. “It’s a disgrace.”

Fischer said the goal of the billboard campaign is to get the mayor to meet with his group and said they’ll continue putting up signs along his campaign trail until that happens.

The city’s Department of Social Services has already declined a request to meet with the West 58th Street Coalition, saying in an email to the group that “we do not believe that the meeting you have requested would be productive.”

Asked for comment on the billboards, a spokesman for the mayor’s office said, “We’re committed to giving New Yorkers experiencing homelessness the opportunity to remain in their communities. We look forward to opening this site and providing high quality shelter services to those who need it most.”

The West 58th Street Coalition has been engaged in a battle to prevent the city from opening a men’s homeless shelter at the former Park Savoy hotel at 158 West 58th Street since it was announced last January. The group sued the city to block the shelter last July, citing fire safety concerns at the building, which only has one means of egress. Although at least two are required now, the city has argued that the building gets a pass because it was built in 1910 before that rule was put in place. 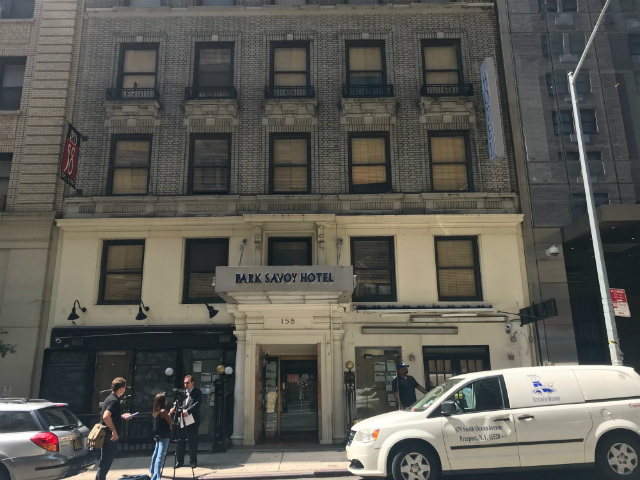 In April, a Manhattan Supreme Court judge dismissed the West 58th Street Coalition’s claims, saying it was appropriate to defer to the city on fire safety. In June, a state appellate court denied a motion by the group to extend a temporary injunction that had prevented shelter residents from moving in.

Fischer emphasized Thursday that his top priority is ensuring the safety of shelter residents, and said he would be happy to have the shelter open as planned if the building was modified to be made safer—for instance, by adding another staircase.

“I don’t want to be associated with NIMBYs,” Fischer added.

His group’s list of concerns read like a litany of NIMBY-isms, though. “It has been well documented in published reports that areas that border on homeless shelters for men have many problems with loitering, drug use, and other criminal activities,” the group wrote in a petition it launched against the shelter last year. It added that the shelter would have “an enormous impact on our densely populated, narrow, high pedestrian-traffic street.”

The West 58th Street Coalition spent $1,500 on the first billboard, which will be up for a month, and may spend as much as $100,000 to put up additional signs in Iowa and other states along de Blasio’s campaign trail, Fischer said.

“When he realizes he’s not going to be president,” Fischer added, “we’re going to follow him around here with the signs.”

#homelessness
#homlessness crisis
#midtown
#NIMBYs
#west 58th street coalition
Do you know the scoop? Comment below or Send us a Tip