Last year, the Bloomberg administration unveiled a proposal to rezone Midtown East around Grand Central Terminal to build much bigger skyscrapers, sometimes up to 60% bigger. And without the lengthy approval process.

If passed—the city's City Planning Commission will decide whether to certify the plan on Monday, April 22—it could mean buildings as big as the Empire State Building added to the already bustling area. The city would also charge builders more to build higher buildings, and the money would go to infrastructure improvements.

Of course, there are concerns—and the Municipal Art Society of New York, the non-profit dedicated to a livable NYC, has many. In fact, the MAS (which refers to the area as "East Midtown") commissioned photo simulations of what a rezoned East Midtown could look like, based on the various details for height and setbacks regulations as well as floor area ratios in the Draft Environmental Impact Statement, based on the city's February presentation. And the renderings are pretty dramatic. 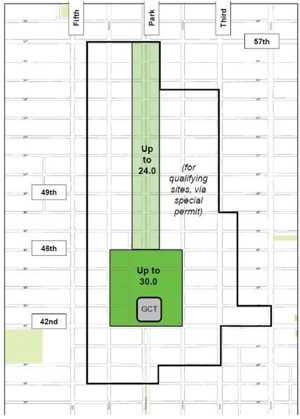 The Municipal Art Society says, "The verifiable photo simulations show how iconic buildings such as the Chrysler building will not be visible from many vantage points if development occurs as proposed." Further, the group adds that these images don't show "the effects added density will have on the ground- blocking sunlight from the street and creating additional crowding on the already overburdened 4/5/6 subway lines."

We spoke to Raju Mann, the Municipal Art Society's Director of Policy and Planning, about the MAS's position. To those who argue that NYC is supposed to change, Mann says, "We embrace change and believe in change and advocate for change—moving MSG and building a Penn Station we deserve is one recent and timely example. But change should make things better. The City's plans do not adequately address the critical infrastructure needs of East Midtown (particularly the overwhelmed 4/5/6 subway lines) they don't imagine a new public realm—improved sidewalks, better connections to transit below ground, or a clear plan for new open spaces—and they don't recognize that simply building bigger buildings will not be enough to attract the kinds of companies and people NYC needs to attract."

The NY Post's Steve Cuozzo has argued that the "city urgently needs modern new office towers, but nobody’s going to put up such small ones that are now allowed in Midtown’s precious heart." Mann suggests, "We can’t afford to get this wrong because it’s too important to NYC and we can’t rush this proposal in an effort to get something, anything, done. Grand Central has turned 100 years old this year and we need to continue to learn the lessons of those kind of historic commitments—extraordinary infrastructure, ambitious public space, careful and inspired design." And the MAS just doesn't "see that same spirit or focus in this proposal."

Forget the under-construction 2nd Avenue helping alleviate any added train congestion: Mann points out that the future T line is "only funded for one phase—from 96th Street to 63rd Street—and that is still many years away." Further, he says, "Although the northern boundary of this redevelopment plan is 57th Street the heart of this proposal is the area around Grand Central which will not be directly served by the 2nd Avenue subway."

Mann emphasizes, "This plan needs a real civic vision and not simply larger buildings," and referred to Justin Davidson's essay in New York Magazine. Davidson wrote, "There is too much at stake to rush a lopsided scheme that grants developers specific enticements and waves away everyone else with the promise of a well-run slush fund."

Municipal Art Society Report: A Bold Vision for the Future in East Midtown by MunicipalArtSociety