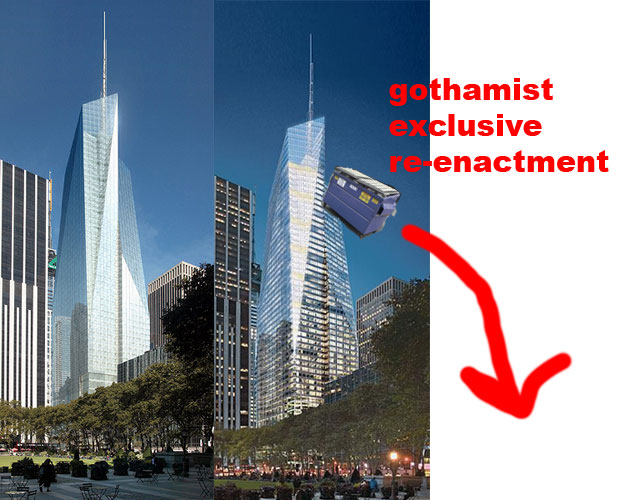 A crane at One Bryant Park, aka the Bank of America tower on Sixth Avenue between 42nd and 43rd Streets, reportedly lost some materials it was carrying. Curbed is reporting that the materials/debris/ garbage bin fell at least 35 floors - and it looks like a cab was hit. A Gothamist reader who works near the building writes:

Our windows look out at the construction site and it looks like some beams were dropped right onto Sixth avenue. No cars were crushed, but I couldn't tell if anyone was hurt or not (there were ambulances at the scene). Sixth ave is closed off north of 42nd and half of 42nd St is now closed, too. We've been told by our building management to stay away from the windows on the Sixth avenue side and the entrance to the building is closed - we're using a service entrance now.

We've heard that three people have been injured, but that hasn't been substantiated. CityRoom reports that some materials have fallen onto another building, which is being secured by emergency responders.

Last year, a crane fell from construction site 110 Third Avenue, hitting a cab, but miraculously there were no serious injuries. And How Stuff Works has an entry on how tower cranes works.

Photograph from a 2006 visit to the BoA site

UPDATE: Meatloafing has some good shots of the damage the dumpster caused on its way down. They also caught this awesome shot of a segway-riding journalist at the scene: 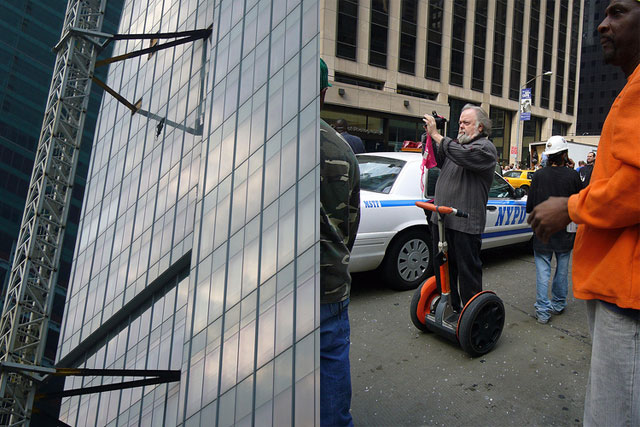 Meatloafing also has a video:

Update: Six people - three firefighters, three civilians - have minor injuries. It seems that a crane dropped a container about 20 stories; it fell onto a landing and its debris fell to the ground. Many streets in the vicinity are closed.