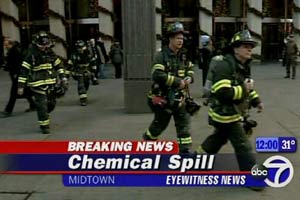 Yesterday's explosion at 1211 Avenue of the Americas (aka 6th Avenue at 48th Street), the building that houses News Corporation and entities like Fox News and the NY Post, was caused by two chemicals reacting together. About 700 people were evacuated from the 42nd to 45th floors as the explosion occurred on the 45th floor, where the mechanic room is located - and where chemicals are stored.

Newsday reports that the explosion occurred while "hazardous materials investigators were conducting a routine check of chemicals in building." Oh, the irony. City law requires that chemicals stored by buildings be checked every year. The Daily News says the "chemical reaction occurred as the anti-bacterial agent biocide spilled and mixed with a second chemical."

Five people were injured, including an FDNY battalion chief (he had chest pains) and a city Department of Environmental Protection hazardous materials employee (he got a six-inch cut on his head). An employee of a Japanese trading company who was evacuated told Newsday the experience was unsettling, "Usually it's a fire drill, but we had firefighters on the floor telling us to grab our coats and our bags."

Employees were allowed to return a few hours later. And operations at Fox News and the Post were unaffected.