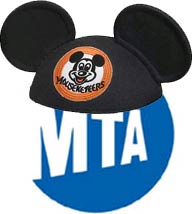 During a board meeting to present the MTA's 2008-2011 financial plan, MTA executive director Lee Sander confirmed yesterday that, yes, fare and toll hikes would be needed in the future because of looming billion-dollar deficits - even in spite of a current billion dollar surplus. And though some politicians were quick to criticize potential hikes (no pol wants fare increases on their watch), the Straphangers Campaign's Gene Russianoff told the Times, "[The MTA has] good arguments, and I think they’re worth listening to. We’ve been complaining for a decade that there’s this debt bomb that’s going to go off, so it would be very hypocritical to say it will solve itself in 2009.”

One MTA board member had a novel idea to stave off fare hikes: Norman Seabrook suggested that the MTA sell Disney the Times Square station advertising space. Seabrook said, "I would rather try to sell 42nd St.'s subway system underground to Disney for $60 million a year and have them paint it any way that they want to paint it. They spend $100 million for one minute to be on the Super Bowl on a Sunday. I think that they would spend X amount of dollars in rent for that terminal." Interesting - back in 2004, the idea of subway sponsorships was considered by the MTA (we guess that the idea is on one of the MTA's many back burners). Though Mayor Bloomberg thinks a Disney-subway-sponsorship is goofy, the Sun reports Seabrook will approach Disney about advertising in Grand Central and Penn Station before he votes on a fare hike.