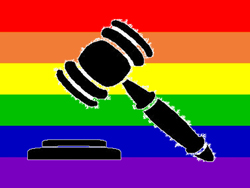 Accused murderer Anthony Fortunato is pinning his hopes of exoneration by baring his soul on the stand and revealing that he was an until-now closeted gay person. In the opening statements of the trial, the lawyer for Anthony Fortunato--the purported ringleader of the three men charged--stated that his client was not guilty of a hate crime murder against a gay man because he himself was gay. Michael Sandy was attacked by a group of men near Plumb Beach in Brooklyn, after arranging a meeting over an online site for gay men. Fleeing his attackers, Sandy was chased on to the Belt Parkway where he was struck by a car and later removed from life support.

When he took the stand yesterday, Fortunato's lawyer asked him about his sexual orientation. According to The New York Times, he answered "I could be homosexual. A homosexual. Bisexual." Michael Timmins, a cooperating witness who plead guilty to a lesser charge after playing a role in the attack, said that Fortunato often joked about meeting gay men in chat rooms, luring them to motels or other places, and robbing them. Fortunato testified yesterday that these were concocted tales to explain his acquaintance with gay chat rooms and to judge his friends' comfortability with homosexuality. In evidence of his homosexuality, three men were subpoenaed to appear and they testified that they had all met Fortunato in the past and had sex with him. On two of the occasions he'd been wearing women's underwear; one witness said, "To my shock he was wearing ladies' undergarments, he had a bra, if I remember correctly, and a G-string."

It appears that the strategy of Fortunato's lawyer is to throw his friend Ilya Shurov under the proverbial bus and pose his client as an innocent bystander. Fortunato testified that when co-defendant John Fox arrived at Plumb Beach with the victim, Shurov "went crazy" and began attacking Sandy, chasing him to his car, and then eventually onto the Belt Parkway with John Fox. Shurov allegedly went through Sandy's pockets after he was hit by the car.