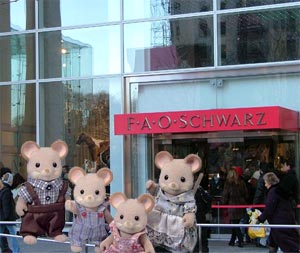 There's nothing like a member of the media witnessing a rodent infestation at your establishment. Over the weekend, the Daily News saw mice in the FAO Schwarz toy store, "scampering between the eyes of plush monkeys and elephants - and around nearby candy jars."

The toy store said an exterminator would be checking out the premises, but added, "There definitely isn't [an infestation], not by any means that we know of. It is not an issue whatsoever in the store." Still, some people could see the mice in the store windows, giving some potential shoppers pause--"It's a health hazard because kids touch things, they like to put things in their mouth" "What if it goes into your stuffed toy and you bring it home?''--while others found them cute and a way of life for NYC stores.

The bigger, somewhat uglier cousins of mice were seen taking over a KFC-Taco Bell in the West Village--the rats ultimately succeeded in shutting down the restaurant. And a mouse was spotted eating some flowers in a Macy's store window. One way FAO Schwarz could keep the mice: Train them to dance on the big piano.

Photograph of FAO Schwarz from WCBS 880, with the Calico Critters Norwood Mouse Family Photoshopped on top

#cute or gross
#fao schwarz
#mice. rodent
#mouse
#toy store
Do you know the scoop? Comment below or Send us a Tip