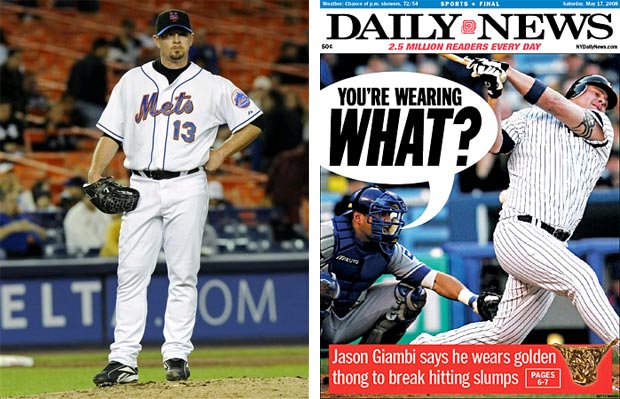 The Mets and Yankees are in the middle of their first subway series game of the season right now (last night's game was rained out--it may be rescheduled later this summer), but the real news is what's happening off the field.

With the day off, Mets manager Willie Randolph held a closed door meeting with players to clear the air over closer Billy Wagner's remarks on Thursday. Wagner, who essentially implied Carlos Delgado wasn't contributing enough, apologized to Delgado as soon as he appeared and apparently the apology was accepted. Wagner then told the media, he wasn't talking about Delgado:

"I shouldn't be answering this stupid stuff about something that was taken out of somebody's imagination -- saying I'm pointing out my teammates when I didn't point out anybody. And I feel sorry that Delgado has to answer questions about something I supposedly said that I didn't say. It's unfortunate."

Randolph and the players discussed focusing on baseball, and general manager Omar Minaya voiced his support of Randolph, whose job is reportedly in jeopardy, "I’m very supportive and continue to be supportive of Willie Randolph. I think we all feel we should be playing better.”

Over with the Bronx Bombers, the big brouhaha is about Jason Giambi's admission to Portfolio that he wears a slump-busting "gold lamé, tiger-stripe thong under his uniform." After saying he's shared the "golden thong" with fellow players Derek Jeter, Bernie Williams, Johnny Damon, Robin Ventura, and Robinson Cano, the Daily News delivered 26 golden thongs to the Yankees clubhouse: "one for every player on the team and manager Joe Girardi."

While Damon said, "I will definitely wear it if I can," Jorge Posada said, "I don't know if it works. I haven't worn it yet." And the News also confirmed that Giambi's "golden thong" does get washed between wearings. Let's cue up the Sisqo!

#billy wagner
#carlos delgado
#Jason Giambi
#mets
#sports
#thong
#Yankees
Do you know the scoop? Comment below or Send us a Tip