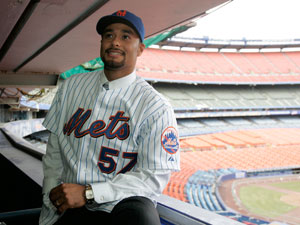 The Mets introduced Johan Santana, their newest player and best attempt at getting back to the World Series, in Flushing yesterday. Just last week, the Mets and Santana agreed to a six-year $137.5 million contract that makes the Mets a favorite in the National League. Scores of press were on hand for the introduction, as well as David Wright, Omar Minaya, owners Fred and Jeff Wilpon, and Willie Randolph. Before his official introduction, the Mets played a video montage to showcase their new arm. The video had music by Carlos Santana and had greetings by famous Mets interspliced with the pitcher's highlights.

The 28 year-old lefty (who turns 29 next month) will wear the number 57, his number with the Twins. Santana's goal with the Mets is to win a World Series, saying "We've got the right guys to do it. We're ready for it and we're gonna make this very special." He also said that he hopes to duplicate the parade that the Giants had on Tuesday.

While everyone was happy yesterday, the deal between Santana and the Mets was very close to not happening. Before receiving an extension from Major League Baseball, Santana threatened to walk out of negotiations because he and the Mets had a $5 million difference in numbers. Santana told Fred Wilpon (who offered $135 million), "I told you I wasn't backing off my number. I appreciate your offer, but I'm passing on it." After Wilpon told Santana that it was a lot of money to walk away from, Santana said "No disrespect to you. But I deserve it. I'll just go back and pitch and I'll get it later. Alex Rodriguez is the highest paid player in the game. I'm the best pitcher. I'm not even asking for that [Rodriguez] kind of money." It's a good thing the Mets and Santana decided to split the difference, otherwise the Mets would have been met with a lot of criticism.