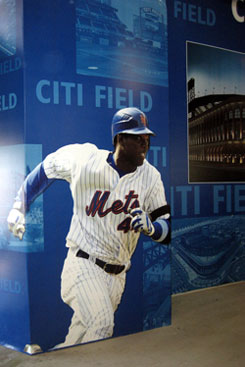 After two seasons of constant trade speculation, the Mets finally have moved Lastings Milledge in a deal this afternoon to the division rival Washington Nationals. In return, the Mets receive Outfielder Ryan Church and Catcher Brian Schneider. Milledge was not always a model citizen as a Met, either on the field or of the field, but nonetheless had been long touted by the organization and the media by a top tier outfield prospect.

While he has shown some improvement, clearly it wasn't enough for Omar Minaya and the Mets brass to feel he was worth keeping around. Initial fan reaction has been somewhat negative, perhaps expecting to get more for the 22 year old outfielder, but Minaya was on Mike and the Mad Dog this afternoon talking up both new additions, calling Church his "every day outfielder" and praising Schneider's defense. While this move may not exactly be the off-season splash Mets fans were hoping for after their epic regular season collapse, it's likely only one piece in the rest of the winter puzzle. Whether they will be able to acquire any quality arms to shore up their biggest holes in the bullpen and rotation, is still to be seen.

For another perspective on the trade, check out DCist's reaction.