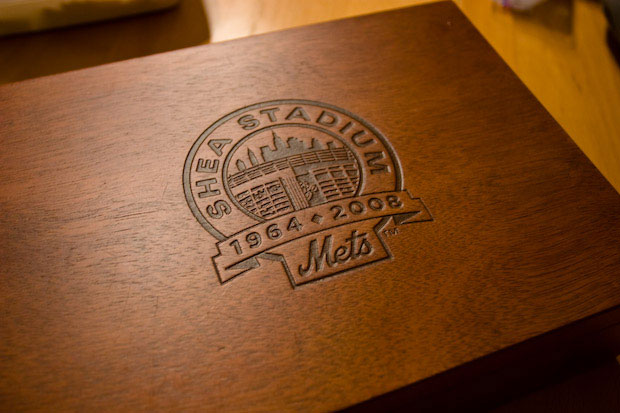 Photograph of keepsake box by Tien Mao; it seems Mets 2008 season ticket plan holders received them with the tickets

Like the Yankees, the New York Mets are planning a move to a new stadium. While Shea Stadium is not as storied as Yankee Stadium (the Post says, "It's ugly, sterile and horribly outdated..."), the Mets have enjoyed two very memorable championships there.

Today, the NY Times wrote about William Shea, "He laughed when he was introduced by a master of ceremonies as the man for whom Shea Stadium was named — 'Bill Stadium.'" But players seem to look forward to CitiField; David Wright told SNY, "I have a lot of memories on the field, probably even more in the clubhouse with the guys…But, I think, it makes the transition a little easier when you look nextdoor and you see what’s going up. But, I will be sad, there’s a lot of history in this park and a lot of memories for me personally.” Wright and his teammates are also hoping to erase memories of the way last season ended terribly. And here's a gallery of some of our readers' memories of Shea is below.

Today, Shea's son, William Shea Jr., threw out the first pitch in the Mets' game against the Phillies. And the rickroll of the 8th inning Sing Along song was successful, but the Mets don't seem too pleased with the prospect of fans singing along to Rick Astley's "Never Gonna Give You Up," so there will be a fan-response runoff at the game today. Other contenders: Bon Jovi's "Livin' on a Prayer," the Monkees' "I'm a Believer," Billy Joel's "Movin' Out," Neil Diamond's "Sweet Caroline," and The Foundations' "Build Me Up Buttercup."

Update: The Mets lost their 2-0 lead in the seventh when relievers gave up three runs. The Phillies won, 5-2.

#david wright
#mets
#new york mets
#ny mets
#shea stadium
Do you know the scoop? Comment below or Send us a Tip