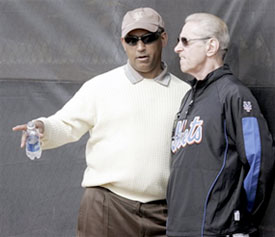 Fred Wilpon has come out and publicly endorsed his GM Omar Minaya and defended the handling of Willie Randolph’s dismissal. “I think Omar has done a great job,” Wilpon told reporters Monday at MLB headquarters while also explaining the thought process behind Randolph’s termination saying it was handled the way it was out of respect for Willie.

Willie Randolph certainly didn’t seem to see it that way when he spoke with the Daily News last week and while Wilpon spoke about respecting the manager, he did add a couple of parting shots:

"It's all a matter of performance. Recognize, Omar gave Willie a chance to be in this position. He had never been a manager in the major leagues or minor leagues. I think Willie did a good job. The results of the last say 14 months were not up to what we thought it had to be."

But, it is clear that Wilpon is firmly behind his GM, adding that, “Omar does a great job” and “Everyone who makes decisions isn't going to make all right decisions." It all sounds great, but will those endorsements still be as strong if Wilpon watches his team miss the playoffs again this season?

Photo of Omar Minaya and Fred Wilpon during Spring Training by AP/James A. Finley

#baseball
#fred wilpon
#mets
#Omar Minaya
#sports
#willie randolph
Do you know the scoop? Comment below or Send us a Tip
A new Gothamist is coming! We’ve moved comments over to our beta site. Click here to join the conversation and get a preview of our new website.