Mets Let Playoffs Slip Away For 2nd Year in a Row 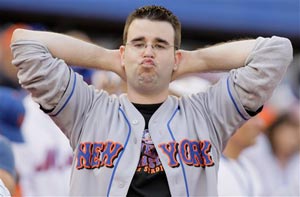 The Mets could not dig up one more miracle at Shea this afternoon and will not be going to the playoffs after losing to the Marlins 4-2 in what will be the stadium's final game. At one point in the day about halfway through their respective games, both the Mets and the Brewers were both down 1-0 and there had to be Mets fans hoping the team could just find a way to limp into tomorrow's one game playoff with Milwaukee.

But the Brewers were able to pull out a come from behind victory. The Mets couldn't. Carlos Beltran gave fans a glimmer of hope when he tied things up at 2-2 with a two-run homer in the sixth. But then the all too familiar story of this September appeared again when the bullpen could not hold on and gave up back to back home runs to the Marlins in the 8th.

Bill Shea Jr., son of the stadium's namesake said, “Some lady had a picture of the stadium and under it it just said, ‘R.I.P.’ I looked at it and I just said that it’s kind of true, because it really is. So, this would be the last funeral. We’ll miss this place.”

#bill shea jr.
#mets
#shea stadium
#sports
Do you know the scoop? Comment below or Send us a Tip
A new Gothamist is coming! We’ve moved comments over to our beta site. Click here to join the conversation and get a preview of our new website.