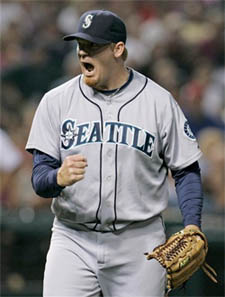 In two days Omar Minaya has revamped the Mets bullpen and turned it into a formidable weapon. Minaya has completed a three-team, 12-player trade with the Mariners and Indians that brings relief pitcher J.J. Putz to New York. Putz, who has been closing games for Seattle the past three seasons, had some elbow problems last season but pitched very well at the end of the season. The combination of Putz and Francisco Rodriguez should make the Mets very hard to beat in the late innings. In addition to Putz, the Mets receive outfielder Jeremy Reed and reliever Sean Green, both from the Mariners. Leaving New York are seven players, Aaron Heilman, Endy Chavez, Jason Vargas, Maikel Cleto, Ezequiel Carrera and Mike Carp, all to the Mariners, and Joe Smith to the Indians.

When announcing the trade during baseball's winter meetings in Las Vegas, Omar Minaya said, "All I kept on hearing on the streets of New York when I go get bagels in the morning: 'Omar, address the bullpen,'" Minaya said at the Bellagio early this morning. "Well, to Mets fans: We've addressed the bullpen."

While Putz hasn’t commented on the trade, his agent said that being a setup man “wouldn’t be his preference”. He will earn $5 million next season and the Mets will have an $8.6 million option on him for 2010.