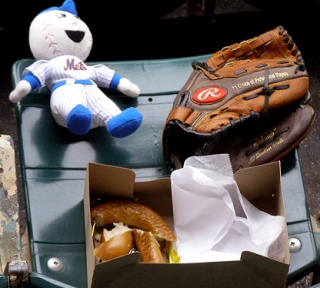 In non-report card 7 train news, the MTA is now offering express 7 service after Mets games during weeknight games. And the service will start after tomorrow's Mets-Cincinnati Reds game. Post-game express service will last an hour, with trains leaving Willets Point-Shea Stadium every six minutes. Trips to Queensboro Plaza will now take 13 minutes (from 19 when taking the local) and trips to Times Square will now take 25 minutes (from 31).

MTA Executive Director and CEO Elliot Sander said, "The introduction of weeknight post-game express service is a major component of an overall initiative with the Mets to get people out of their cars and onto the train. The subway has always been the fastest, most economical and ecologically-friendly way to travel to and from the game and the addition of express service makes it even more attractive." Hmm, will Mayor Bloomberg try to rope Mr. Met into appearing at a congestion pricing rally?

And funny: When asked about the possibility of 7 express service a few months ago, NYC Transit Authority spokesman Paul Fleuranges said it would be really hard to add express service.