Yesterday morning I was waiting for a 9:32 a.m. Metro-North train to arrive, but instead, a NJ Transit train pulled up to the Connecticut station at that time. I got on, thinking maybe MetroNorth needed to use NJ Transit's equipment for some reason. My heart nearly stopped, however, when an employee on the train hollered: "Welcome to the Football Train! We're headed to Secaucus, New Jersey, Jets fans!" A quick glance around and I noticed I was the only one not wearing kelly green, except for that Broncos fan behind me.

I am learning a lot about the Broncos and what beer is best before 10 a.m. on this football train.

I had never witnessed something like this before. A NJ Transit train in Connecticut? The repetitiveness of the jovial ticket taker who walked the length of the train car multiple times welcoming one and all to "The Football Train," over and over again, was making this whole scenario seem even more strange. Was I dreaming? I pictured John Malkovich maniacally grinning in a Jets jersey and painted face as the train's conductor on this surreal journey to the Garden State. 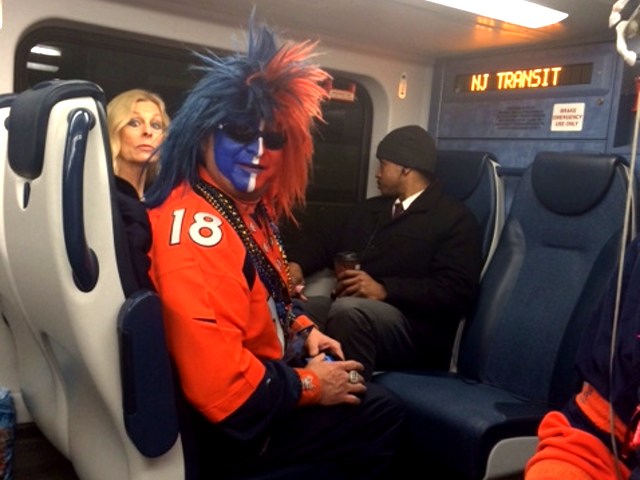 All aboard The Football Train! (Photo via amatuerphotographer's flickr)

The Football Train is real, though, and lucky for me, it was stopping at Penn Station before continuing on to the big game. An employee on board said this was in part to test out if there is interest in Metro-North service to Penn Station (currently it only runs to Grand Central Terminal), and he claimed that by next year the route should be a more regular part of Metro-North's schedule.

I turned to Aaron Donovan at the MTA for some clarity: "As of now, Metro-North, in partnership with NJ Transit, runs the train you boarded every Sunday that there is a 1 p.m. Jets or Giants game. The trains originate in New Haven and go through Penn Station to Secaucus, where football fans can transfer for a quick shuttle to the Meadowlands." But can we expect more Metro-North service to Penn Station next year? Donovan told me:

"It won't happen next year, but there is a longer-term plan to run Metro-North New Haven Line trains to Penn Station every day. As part of that, we would build four new MetroNorth stations in the Bronx. We are seeking $743 million to build the stations as well as do work needed to improve the tracks and signals to make them able to handle the extra trains. It is included in our proposed 2015-2019 Capital Plan (PDF). These trains would start running upon the completion of the East Side Access megaproject that is connecting the LIRR to Grand Central, which is slated for 2022."

That is, provided Governor Andrew Cuomo keeps his hand out of the till.

Is it worth it? I found the ride enjoyable, despite the uncomfortable NJ Transit train seats—the views before entering the tunnel to Penn Station are particularly stunning, and something you don't get on the Metro-North route. For these Football Trains, the MTA is also working in partnership with Amtrak, since Amtrak controls the tracks between New Rochelle and Secaucus. It's also pretty great arriving at Penn Station (she typed, becoming the first human to ever type those words)—the transfer options are plenty and more useful (to me) over there (NJ Transit, PATH, LIRR, Amtrak, and the 1/2/3 and A/C/E lines), as opposed to Grand Central (which offers the 4/5/6, 7, and S). So this will be pretty sweet if it happens... in 8 years.

As for The Football Train part of all this, while it was pretty empty headed to New Jersey, you may want to consider an alternate way home after the game:

@njtransit talk about a disincentive to take public transportation to the game. Game ended hour ago... pic.twitter.com/wxdoObFLX7

#football train
#metronorth
#nj transit
#penn station
#original
Do you know the scoop? Comment below or Send us a Tip
A new Gothamist is coming! We’ve moved comments over to our beta site. Click here to join the conversation and get a preview of our new website.