Commuters who boarded the 6:52 a.m. Metro-North train from New Haven to NYC on Monday found quite a surprise waiting for them on every seat: a formal letter of apology from conductor Michael Shaw (a.k.a. @Shawdogs65).

Shaw felt just terrible about a big SNAFU that occurred during Friday's commute, when he advised passengers waiting on platforms at local stops to wait for the next train, which he believed would run express. But that express train never came. It was canceled. Countless commuters were late to work, got fired, slinked home early to find their spouses cheating on them with the FreshDirect guy. And Shawn reportedly spent the weekend wearing a hairshirt and flagellating himself with a cat o' nine tails, while also making time to compose this soul-bearing letter of apology: 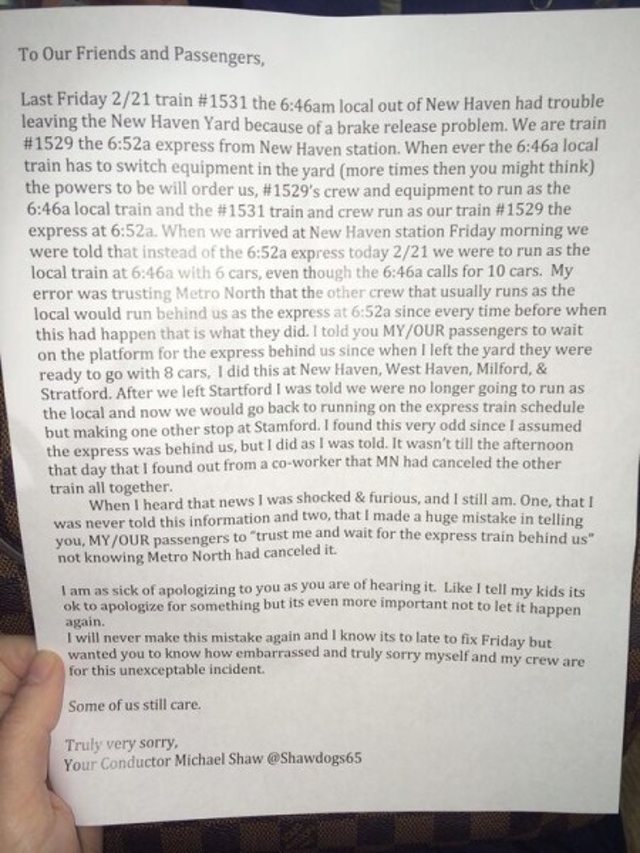 "I made a huge mistake in telling you, MY/OUR passengers to ‘trust me and wait for the express train behind us,’ not knowing Metro-North had canceled it,” Shaw, 48, wrote. "I will never make this mistake again." In an interview with the Times, Shaw explained, "I knew Monday morning they were going to ask me a million questions. I thought, ‘How can I apologize?’ And Metro-North does that. They put out letters on the seats when they have an incident that affects a lot of people. I just took their idea and made it my own."

Metro-North, however, does not condone this sort of personalized admission of guilt. "Conductor Mike Shaw is one of the many Metro-North Railroad employees who care deeply about our customers," a railroad spokesman said. "His open letter expresses the same frustration that customers and employees alike feel about the railroad’s recent challenges. While we share his concerns, we do not condone his methods of communicating them." Stiff upper lip and all that.

But no one complained about the apology, and the reaction thus far appears to be one of universal forgiveness. Shaw, commuters recognize, is a human being just like us, not some faceless monolith yelling at us to move to the middle of the car. Commuter advocate Jim Cameron, founder of the Commuter Action Group, tells the Daily News, “I would just advise Metro-North to back off, to leave the guy alone. He deserves a commendation, not criticism. He’s doing what the railroad should be doing."

After all the media hoopla, ol' Shawdog seems to be on a roll with the self-criticism. Here's his latest tweet from this morning:

Good morning to my passengers. All the Events of yesterday didn't help us get more cars on the 652am. 6 old cars this morning:(

#apology
#metro north
#michael shaw
#sorry
Do you know the scoop? Comment below or Send us a Tip