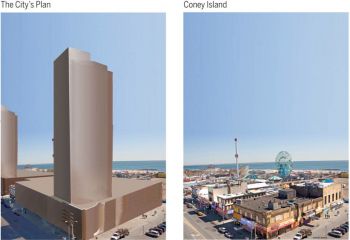 Today some mermaids took to the streets of Lower Manhattan to speak their mind to members of the City Planning Commission, prior to their vote later this week on the City rezoning plan for Coney Island. The mermaids are readying for their big parade coming up next week, and are quite displeased with the plan that will reduce Coney's amusement district. Basically, the City is Eugene Levy and Coney supporters are Tom Hanks.

Miss Cyclone, and leader of the mermaids, Angie Pontani explained, "Coney Island equals amusements. It’s not brain surgery. We have to make the amusement area bigger. If this plan goes through as it is, it’s going to be a tragic loss, and 20 years from now, people are just going to say, ‘What was the City thinking?’”

The finned females brought with them their own rendering of what the city's hotel high-rise may look like (the city hasn't released one publicly yet), and urged the commission to expand the space reserved for amusements and to move any high-rises away from the heart of the amusement district.